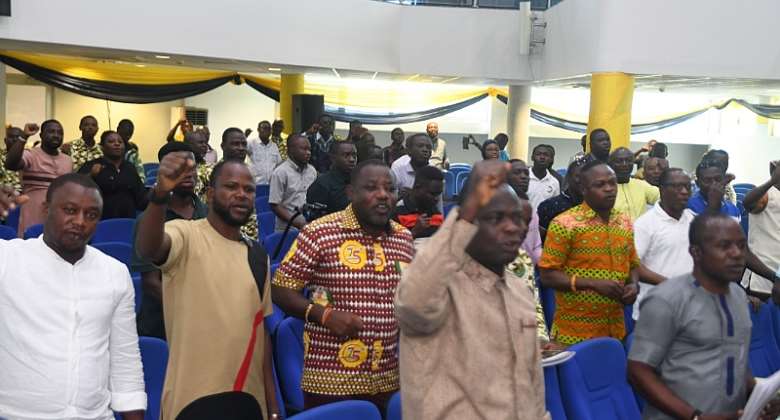 Held at the Shippers House in Accra on Thursday, December 8, the group saw the need to "Awaken Working-class Consciousness for Ghana's Accelerated Growth and Development," calling for the need for them to be given a fair share of what they produce.

In his remarks, Mr. Mensah Kwarko Gyakari, the group's chairman, lamented the poor salary structure in the sector.

He urged members of his outfit to be awake and take real action that will force the policymakers in the sector to stop giving them a surplus of what they have been producing.

Mr. Kwarko Gyakari made a plea to the government for it to take a critical look at the tax components given to the state by the mining companies, as well as the employment it offers the country’s citizens and how good their conditions of service are.

Ending his remarks, the chairman again call on members of the group to help its leadership stage a redemption fight that includes protecting their pension proceeds from any possible government haircuts.

On his turn, the General Secretary for GMWU, Mr. Abdul Moomin Gbana, took the chance to highlight some of the numerous challenges affecting the mining workers, the labour population, as well as the entire citizenry of the country.

Among several issues, the group raised concerns about the high taxes at a time when citizens are wallowing in extreme economic hardships.

"On Thursday, November 24, 2022, Ghanaians woke up to some harsh changes in taxes. In the finance minister’s 2023 budget statement to the Parliament of Ghana, he on behalf of the government made certain adjustments to most direct and indirect taxes, which undoubtedly would further worsen the cost-of-living crises that workers and citizens of this country are currently going through amidst high inflationary pressures," he lamented.

"Therefore, the introduction of an additional income tax bracket of 35% from 30% and the increase in the value added tax (VAT) rate by two and a half percentage points from 12.5 percent to 15 percent, including other major reforms undertaken with respect to VAT exemptions, just further exacerbate the already fragile state of individuals and households," he added.

Though he acknowledged the fact that payment of taxes is critical to national development, he took into consideration the current hardships coupled with extremely high inflation rates, causing surges in general commodity prices and pleaded with government to rescind its decision.

Mr. Moomin indicated that the hardships "make the timing and these adjustments completely inappropriate and insensitive, and the Ghana Mineworkers’ Union takes an uncompromising position against these increases, particularly the introduction of an additional income tax bracket of 35%."

Aside from the taxation, the GMWU totally rejected the government’s new domestic debt exchange programme, vowing to do whatever it could to ensure its members do not lose part of their pension fund to haircuts.

"Whilst we disagree with the Debt Exchange Program because the government failed to consult with key stakeholders like organised labour, we are totally opposed to any debt restructuring programme that would impact workers’ pensions and individual life savings," he stated.

The General Secretary stressed, "Comrade Chair, the Ghana Mineworkers’ Union in one voice with the TUC (Ghana) and all its affiliate would like to reiterate without any fear of equivocation that we will do everything in our power to ensure that our members are fully protected and that not even a pesewa of pension funds is lost in the debt restructuring programme."

To be able to put an end to all these challenges confronting the country for a longer period now, Mr. Moomin proposes in his speech that the country focuses on value addition rather than exporting raw mineral to help generate more income than what is being generated currently.

Delivering a fraternal message on behalf of Dr. Anthony Yaw Baah, Secretary-General of the Trade Union Congress (TUC), the Deputy General-Secretary, Joshua Ansah, joined the call for the workers to rise up and fight a battle that will make them achieve a review of the labour laws, adding that it is long overdue.

Mr. Ansah lamented how Ghanaian citizens, who are the owners of the mineral deposits, have become common labourers and are even being paid peanuts for their sweat, assuring them that “victory is possible, we can win," if only they will rise and protest.

Joining the meeting as a special guest, Mr. Kwesi Pratt Jnr., in his capacity as the General Secretary of the Socialist Movement of Ghana (SMG), also raised concerns about how Ghanaian workers have been cheated for a long time.

The seasoned journalist lamented how, despite working tirelessly, Ghanaian workers are still lacking basic social amenities in their communities.

"Today, Ghana spends more than 100 percent of her total national revenue on only three line items: debt service, debt repayment, and public sector emoluments. Our debt-to-GDP ratio is said to be more than 100 percent; our children in rural communities have no textbooks; their school buildings are collapsing; the teacher population is grossly inadequate; and malnutrition is ravaging the countryside," he lamented.

"The working people have no access to potable water, housing, or health. The future of the working people of Ghana is getting bleaker and bleaker. We must halt the slide down the slope and commit to the construction of a new society in which those who produce must own the means of production and distribution," he added.

According to the famed socialist, there is a need for "a society in which the accumulation of surplus must be for the sole purpose of ending inequality, making land available to the tillers, providing food for the hungry, and healing the sick. A new society in which no child will go to bed on an empty stomach."

He urged the GMWU and other labour unions to change their mode of operation from only focusing on wage negotiations and workers' benefits to one that would position itself as a full participant in the overall development of society.

"Comrades, we cannot win this battle by relying on the old model of trade unionism, which focuses exclusively on wage negotiations and workers' benefits, as important as these are. The new and relevant trade union must be one that sees the workers as the producers of the surpluses that are appropriated by the capitalists.

"That new trade union must, in essence, go beyond wage negotiations and position itself as a full participant in the overall development of society," he directed.