Mahama “Will Do” What Akufo-Addo Has Already Done 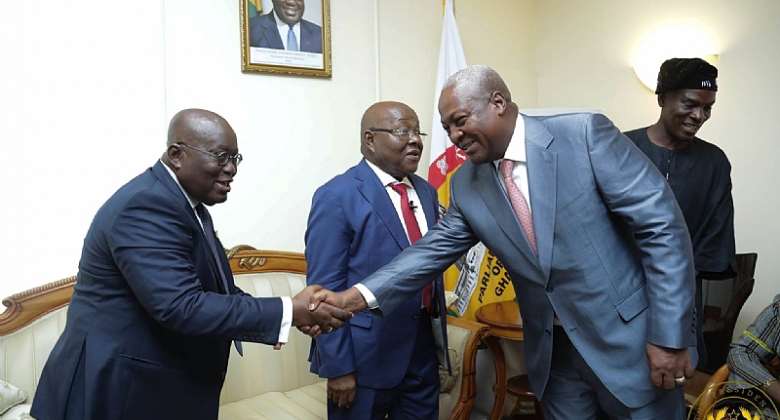 He has spent most of the past 6 years, that is, since he was auspiciously and seismically given the boot by Ghanaian voters, virulently accusing the succeeding Akufo-Addo Administration of having been either reluctant or extremely slow to complete projects that he promised to undertake to and see to completion, while he was campaigning to be elected as President of the Sovereign Democratic Republic of Ghana. Indeed, so meanspirited and morbidly megalomaniacal has been the Bole-Bamboi native, from the Akufo-Addo-created Savannah Region, that Mr. John “European Airbus Payola” Dramani Mahama has deliberately and conveniently failed or flatly refused to inform his supporters and the general Ghanaian public about the incontrovertible fact that his immediate successor had not campaigned for the Presidency with the main or sole agenda and the purpose of merely completing the legions of half- and quarter-completed projects that he only started with scarcely a year or two towards the 2016 Presidential Election.

Even more significantly, he has conveniently and deliberately ignored to let on to Ghanaian voters the fact that he had left behind absolutely not a pesewa or a cent for use by the succeeding Akufo-Addo Administration in completing these projects, largely schools and clinics and one or two housing projects. In nearly each and every instance vis-à-vis the aforementioned projects, the Mahama regime squandered or criminally embezzled monies earmarked for the start and the completion of these projects immediately prior to exiting from government. But, of course, such deliberate and unconscionable betrayal of the trust of the people by Yagbonwura Kwame Gonja has not prevented Nana Addo Dankwa Akufo-Addo from completing a countless number of these projects, including the prompt and the capital intensive resuscitation of the John Agyekum-Kufuor-established National Health Insurance Scheme (NHIS), into which approximately $2 billion (USD) was sunk shortly after the three-time Presidential Candidate of the New Patriotic Party (NPP) assumed the democratic reins of governance.

Then, there was also the millions of dollars that was invested in the Fee-Free Senior High School System, which the then-Candidate Akufo-Addo promised all able-bodied and talented Ghanaian youths, but which the then-President John “Ford Expedition Payola” Dramani Mahama disdainfully characterized as a practical impossibility and the fairy-tale promise of a desperate politician hell-bent on grabbing for power at all costs or by hook or crook. For example, of the 200 physical plant facilities or Senior High School Blocks that the man from the Akufo-Addo-created Savannah Region promised to construct all across the then 10 administrative regions of the country, according to Mr. Franklin Cudjoe of the Accra-based IMANI Policy Studies Institute, only a diddly 40 were really constructed or were lifted off the ground and/or were still under construction on the eve of the auspicious exit of the Mahama-led regime of the National Democratic Congress (NDC).

It is equally significant to also learn that most of the money earmarked for some 200 Community High School Projects had been donated by UNESCO – that is, the United Nations Education, Scientific and Cultural Organization – and not money directly raised through the creative or the progressive instrumentality of the Mahama government itself. Indeed, as of this writing, Ghanaians had yet to be publicly informed by the former President precisely how much of the aforementioned UNESCO-donated funds had been appropriated for their intended purpose, as well as how much of such funds had been passed on to the succeeding Akufo-Addo government. In essence, it is squarely against this background that the former President’s smug and cavalier talk about having left behind an immense cash flow for use by the current government for the development of the country is to be weighted or measured.

In the infamous case of the Saglemi Housing Scandal, for just one striking example, it has now come to public knowledge that tens of millions of hard currency earmarked for the completion of this project had literally been allowed to fall through the cracks of official corruption by a so-called Permanent Secretary of the erstwhile Mahama-presided Ministry of Public Works and Housing. The last time that we heard of anything having to do with the Saglemi Embezzlement Scandal, like all things Ghanaian, a political football tournament was being hotly played over it between operatives of the defunct Mahama Administration and the present one. At any rate, what we just wanted to note or put on record here is the fact that when the former President appeared at the durbar grounds of this year’s Godigbe Festival, in Aflao, in the Volta Region, as usual, Yagbonwura Kwame Gonja shamelessly resorted to the sort of intellectually dishonest and morally insulting promises that most self-respecting politicians and statesmen and women would rather not attempt.

“I had talks with our prominent Paramount Chief, Torgbuiga Amenya Fiti, when I was in office. In fact, we had agreed that due to the strategic location of Aflao as the most prominent border town in the country, there should be a modern market on the Aflao side[,] just as with our counterparts on [the] other side in Lome.” Now, these are not the words of a serious and a responsible leader who takes the passionately NDC partisan citizens and inhabitants of the Ketu-South Constituency, in which Denu is the administrative capital, seriously. Else, the Aflao-Diamond Cement Road and the Komla Dumor Road, both of which reportedly lead to the Aflao Paramount Chief’s Palace, which the man who ought to have reconstructed or repaved and upgraded then, but now claims are in a deplorable state, would have since long ago re-macadamized and “modernized” instead of literally blowing hot and rancid air about the same (See “Next NDC Government Will Modernize Aflao – Mahama” Modernghana.com 11/27/22).

And, by the way, Osagyefo Dr. Kwame Gonja had also called the Paramount Chief of his own native Gonja enclave and promised to create a separate region for him and his people out of the Old Northern Region. But guess what, Dear Reader? It was his successor “The Little Action Man from Kyebi” who created the ethnic Gonja-dominated Savannah Region and some five others around the country, and not the empty-promise-minting Papano.