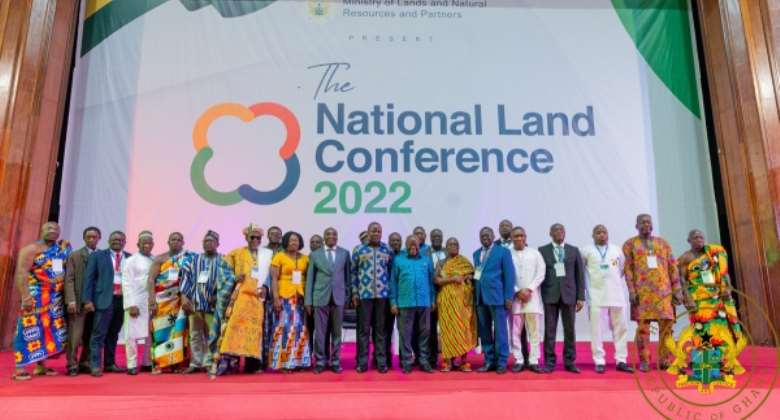 President Nana Akufo-Addo has kicked against wrongful and multiple sales of lands by chiefs and people without authority, tagged as ‘land guards’.

He bemoaned the country’s lands which have been taken over by clans, skins, stools and families, adding that the situation has negatively affected development.

The President suggested that a consensus is built to check lands administration and called for a new model to be developed to curtail the menace.

“Unfortunately, in our urban areas, the customarily lands system has been the bane of most of our problems such as double sale of lands, wrongful sale of lands by people without capacity, multiple claims to lands by different stools, skins, clans or families among others. We must take a critical look at our land administration and develop a model that works for us,” the President said during the maiden edition of the National Land Conference in Accra, on December 7, 2022.

The President expressed hope that the implementation of the new Land Act, 2020 (Act 1036) will yield some positive results, assuring that activities by land guards and some chiefs on the sale of multiple lands will be stopped.

“But laws, in themselves, do not resolve problems. It is their application and effective implementation that yield the requisite results. That is why this conference, which brings together diverse people from different sectors to deliberate on the nexus between land and socio-economic development, is so crucial”.

“Fortunately, the Land Act, 2020 (Act 1036), provides a strong foundation for fashioning out a workable and efficient land administration. The Act has far-reaching provisions which, if implemented, will go a long way to build the effective land administration we desire,” Nana Akufo-Addo said.

He said the country cannot deliver an efficient land administration, if documents on land have to be processed manually, and thus, charged the Lands Commission to expedite action on the digitisation process of land acquisition.

The President said, “we cannot deliver an efficient land administration if documents on land have to be processed manually. We must, therefore, expedite action on the digitalisation process, and ensure that the Commission goes fully digital. As you go into technical discussions, it is my hope that this will be key on your agenda”.

The Land Act, the President added, “addresses the challenges associated with boundary demarcation, and clarifies rights and interests in land, and persons with capacity to alienate land.

“It provides stringent jail terms for various offences related to lands, such as landguardism, falsification of records and fraudulent transactions in land administration”.

Election violence in Nigeria's south east is threatening to ...
15 minutes ago