By Edward WilliamsAnfoega (V/R), Dec. 7, GNA – The United States (US) Embassy in Ghana, has commissioned a Kindergarten School block for the Anfoega Wademaxe community to enhance quality education in the area.
Education 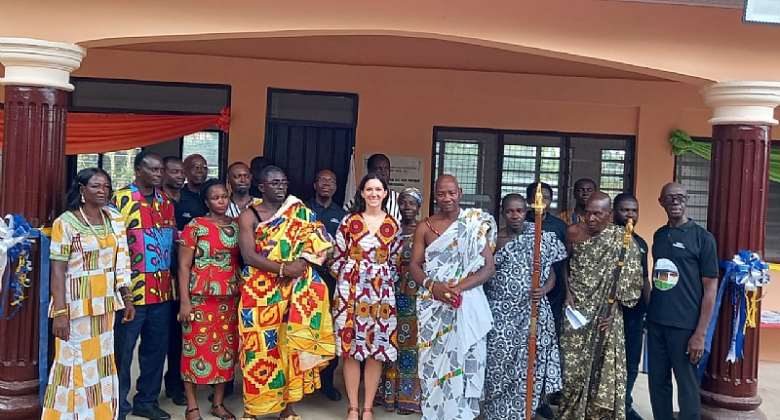 The United States (US) Embassy in Ghana, has commissioned a Kindergarten School block for the Anfoega Wademaxe community to enhance quality education in the area.

The project, under the US Ambassador’s special self-help project was started by the Anfoega Wademaxe Youth Association with the aim of ensuring quality education delivery in the community basic school.

Ms Clarissa Hughes, in a speech on behalf of Madam Virginia Palmer, the US Ambassador, said the Ambassador’s Special Self-Help Programme was a unique one at the Embassy.

“It draws on the philosophy that small assistance to a community that is willing to help itself can go a long way.”

Madam Palmer said the programme had provided support for community development projects across Africa since 1964.

She said the Embassy in Accra had distributed over 2.3 million dollars in Special Self-Help grants to support community development projects across Ghana over the last three decades.

“Self-Help projects must be initiated by a local community or NGO, sustainable and required no additional support from the U.S. government after the initial funding.”

Madam Palmer said that when the Wademaxe community applied for assistance in 2020, the Embassy received more than 200 applications, which went through a very competitive selection process adding that, “your project was one of seven selected.”

She said the committee members were inspired by the project which demonstrated strong community support and worthwhile goals.

Madam Palmer said the community and the project leader were to be commended for the way they brought together religious, political, and business leaders to provide for the needs of the community.

“We are pleased to have supported this project with our contribution of 9,026 dollars in materials for the extension of water to the school, but the real efforts were yours.

“We are honoured to have partnered with you and commend your dedication and hard work to complete this project and promote development in your community.”

Madam Palmer said the renovation project was a testament to the importance the community placed on education and the pupil’s well-being and added that “with care and maintenance, it will serve the residents of Anfoega community for years to come.”

Mr Evans Kofi Bayitse, Project Leader, Anfoega Wademaxe Development Association, said the Association’s aim of focusing and offering quality education to children in the community began in 1975 since they believed government could not do it alone.

He said despite the support, they had not finished and were lacking learning materials, provision of security for learners by fencing the property, water closets and playgrounds.

He said a major challenge affecting the community was their untarred road which affected trade and health care delivery when it came to referral cases.

Mr Bayitse called for more donor supports and assured that they would be accountable to any help received.

Mr Edmund Kudjoh Attah, North Dayi District Chief Executive (DCE) commended the Embassy and the Association for the project which had helped the district and government’s efforts towards quality education delivery.

He said the Assembly was committed to ensuring that it enhanced teaching and learning adding that he would support the re-roofing of the junior high school as well as provide whiteboards for the school.

Mr Augustine Sena Ameka, Vice Chairman, School Management Committee (SMC), said the building could be counted as one of the best nationwide adding that, it was the Committee’s hope that the alliance would establish a strong cooperation to enhance other school projects in the community.