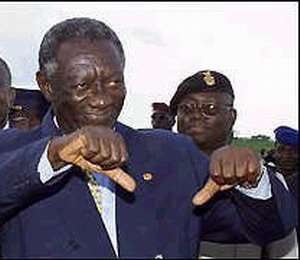 President John Agyekum Kufuor on Tuesday asked the Social Security and National Insurance Trust (SSNIT) to open up and venture into strategic and profitable investments to help to grow its capital and the country's economy.

"The grounds are fertile enough to take confident steps into the investment market," he said when inaugurating the 13-member Board of Directors of the Trust under the chairmanship of Mr John Saka Addo, a Former Governor of the Bank of Ghana, at the Castle, Osu.

He mentioned the roads, energy, water, housing and communications sectors, as areas where it could invest as the prospects looked good for higher returns.

President Kufuor said SSNIT could do that by going into partnership with those who would come in with the know-how and competence.

Additionally, the Trust should accept the challenge of assisting to empower the private sector to enable it to become more vibrant by using its large equity holdings in the banks to bring them together to support the sector's growth.

Vice President Alhaji Aliu Mahama and some Ministers of State were present at the inauguration, where the new Board members took the Oath of Office and the Oath of Secrecy, administered by the President.

President Kufuor suggested to the Board to ensure a revamp of the Trust's Investment Department by engaging crack and competent persons to work in that department, pointing out that similar institutions elsewhere were doing a lot in the areas of social investment.

He said he was happy with reports that the Trust was now making prompt payment of pensions and asked that it should continue to build on that to spare pensioners the trauma and pain associated with delayed payment of entitlement.

President Kufuor noted that SSNIT was a critical partner of the State and as such it was in the interest of the State that they worked together and consulted on their shared vision to grow the capital of the Trust.

He spoke highly of the outgoing Board for the circumspection and wisdom brought into the administration of the Trust, which has helped to make SSNIT become more solid financially, saying the Board did a very good job.

Mr Addo said the Board appreciated the level of confidence the President had in the members and would never betray it.

He said already the outgoing Board had put in place some fundamental policies including placing funds in the banks for on-lending to the private sector; introduction of stakeholders forum where published accounts of the Trust and reports of the Board are openly discussed and the printing of the accounts of all contributors to enable them to keep track of their contributions annually.

He said there were also plans to introduce a scheme that would suit the informal sector to help to mobilise more resources from that sector.

Meanwhile the Students Loan Trust Fund (SLTF), which would replace the SSNIT Students Loan Scheme, would start operating in the 2006/2007 academic year.

Mrs Kokui Adu, Acting Chief Executive Officer of the Fund, who announced this on Tuesday, said the Fund would this year be managed in collaboration with SSNIT to ensure authentic guarantors.

Mrs Adu said loans would be granted to fresh students, who entered accredited tertiary institutions this year adding that the loan amount for students this year would be based on the programme of study of individual students.

"The long-term loan amount would, however, be based on the needs of the student," she said, explaining that it was likely that a medical student would need more money than the one pursuing humanities.

The SLTF would have campus offices that would be the first points of call for students, she said, and added that money would be loaned only to students who qualified and applied.

Students who qualify must be financially needy, be pursuing an accredited programme and must have good academic standards, she said.

Mrs Adu said the loan repayment period for a student pursuing a four-year programme would be 15 years, including the study period, national service period and a two-year grace period to look for employment.

"The loans could be paid by monthly deductions from the beneficiary's salary through the employer; direct periodic payments to the Fund by beneficiaries or outright payment of the total amount. Beneficiaries could also encourage employers to pay off their loans as part of working agreements," she said.

Touching on interest rates, Mrs Adu noted that interest rate on the loan was not profit but was meant to sustain the Fund for younger generations.

Sources for funding would mainly be from the Ghana Education Trust Fund and would be dependent on loan repayment but the Fund would also solicit support from development partners, SSNIT, tax deductions and voluntary contributions.

Mrs Adu said students would need individual guarantors, who were SSNIT or non-SSNIT contributors, Ghanaians, someone who knew the applicant personally, had employment with at least eight years to retirement and income, which is sufficient for guarantee.

She said guarantors may guarantee up to two applicants but parents could guarantee for all children.

As an identification procedure, fingerprints and facial recognitions of the applicant would be taken. There would also be guarantee from tertiary institutions that the student has been enrolled.

Dr Kwabena Quansah, Chairman of the Fund, said SLTF was established in December 2005 under the trustee incorporation Act 1962, Act 106, to provide financial resources for the benefits of Ghanaian students and to promote and facilitate national ideals.

He noted that the students' loan scheme under SSNIT gave a lot of problems and even distracted SSNIT from performing its core functions.

Give EC The Peace Of Mind To Work – NPP Communicator Tells N...
50 minutes ago