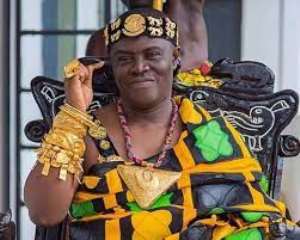 Osagyefo Oseadeeyo Agyemang Badu II, the Paramount Chief of Dormaa Traditional Area has promised to give the New Patriotic Party (NPP) an acre of land in Sunyani in honour of Mr Stephen Ayensu Ntim, the Party’s National Chairman.

Osagyefo Agyemang Badu II, also the President of Bono Region House of Chiefs assured he would work through the Dormaa Stool Lands Secretariat in Sunyani for the fulfilment of that promise.

He praised Mr. Ntim for his recent election to the position of National Chairman of the NPP, saying “the victory is in full recognition of the sacrifice and immense role Mr Ntim’s forefathers played historically to establish particularly Wamfie (Mansen town) and the Dormaa state as a whole”.

Osagyefo Agyemang Badu II made the promise during his closing remark at the electoral victory thanksgiving service held for Mr Ntim at the Wesley Methodist Church, Wamfie, Dormaa East District of Bono Region.

The service was attended by relatives of Mr Ntim and other government officials and top-ranking members of the NPP including Madam Justina Owusu-Banahene, the Bono Regional Minister, Mr Emmanuel Kofi Agyemang, the District Chief Executive for Dormaa East, Mr Paul Apraku Twum, the Member of Parliament (MP) for Dormaa East, regional and constituency executives of the Party, former MPs, religious leaders, and the public.

Wearing all-white apparels, the worshipers waved white handkerchiefs to worship and sang songs of praise in thanking God for bringing Mr Ntim this far and expressed commitment and willingness to support him for the NPP to win the three Dormaa constituencies in the Election 2024.

Osagyefo Agyemang Badu II commended Mr Ntim for bringing honour to the people of Dormaa through his election as the first National Chairman of the Party from the area.

He expressed concern about the activities of illegal miners in the area, particularly foreigners who did not give account of what they earned to the state but repatriated it to their homelands.