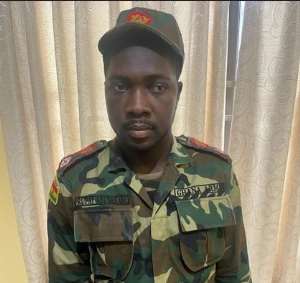 A man identified as Rufai Abubakar has been arrested at Burma Camp while posing as a Senior Military Officer.

The suspect was arrested by the Military Police personnel dressed in a military camouflage uniform in an attempt to access a military installation at Burma Camp.

He is said to have decorated himself with fake Lieutenant Colonel ranks and posed as an officer stationed at Northern Command Headquarters.

When questioned, he claimed that he was proceeding to the Air Force Base to book a flight to Tamale.

During questioning by guards on duty, he gave answers that were incoherent, alerting the military personnel that he was not who he said he was.

After a further probe, he confessed to being an imposter and admitted that he was not service personnel.

In addition, Rufai Abubakar also confessed that he had posed as a Senior Military Officer to scam a man whose name he gave as Mr. Abdallah Abdul Fatawu.

Apparently, he had defrauded the man and collected an amount of GHS30,000 with the promise of recruiting him into the Ghana Armed Forces.

The suspect was arrested in the possession of fake military identification and business cards and other documents bearing his name.

Military uniforms and accouterments as well as a toy pistol were also recovered.

The suspect has now been handed over to the Ghana Police Service for further investigations.