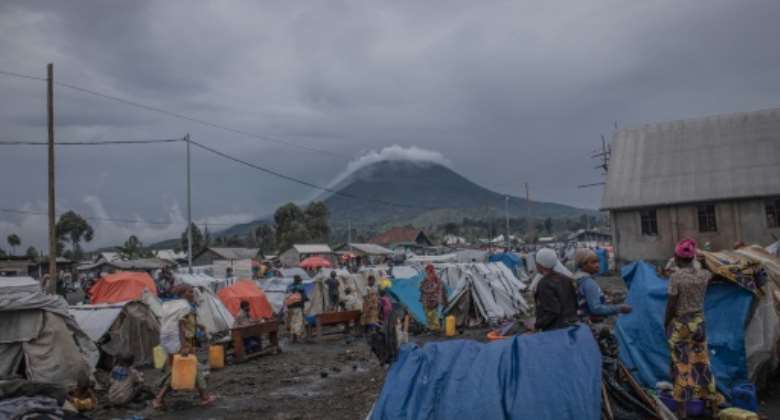 Thousands of people who fled fighting in eastern DR Congo are surviving in makeshift camps north of the city of Goma. By Guerchom Ndebo (AFP)

Since late October, many tens of thousands of people have flocked towards the relative safety of the city, fleeing the advance of the M23 rebel group.

The most vulnerable have settled near the roadside, packed inside tents cobbled together from sticks and tarpaulin on fields of lava spouted from the looming volcano Mount Nyiragongo.

Despite aid efforts, all of the displaced people interviewed by AFP complained of hunger, and several described having to fight for food. Cholera, a consequence of poor hygiene, has also broken out.

"I don't know where to find food," said Suzanne Niramivumbi Kavakura, a small 90-year-old woman, wrapped in a colourful shawl and headscarf.

Sitting outside her hutch-like shelter, she recounted how she fled her native Rugari, in North Kivu province, as fighting approached six weeks ago.

Kavakura's grandchildren found her on the road and they fled south together to Kanyaruchinya, a hillside area overlooking Goma which is now thronged with displaced people and serried rows of tents.

The M23 militia revived operations last year after a long dormancy, advancing towards the city of Goma. By Valentin RAKOVSKY (AFP)

Precise numbers are hard to come by, but according to International Organisation for Migration (IOM) figures from late November, over 140,000 people are camping in the Nyiragongo area north of the city of two million, or sleeping in churches and schools.

Pelagie Ngayabaseka, a 54-old woman with her infant grandchild swaddled to her back, said there wasn't enough food to go around.

"If you don't have the strength to fight, you won't get anything," she said, as dozens of young children crowded around her.

But it took up arms again late last year and in June seized Bunagana, a strategic town on the border with Uganda.

Bazimenya Gasore, 71, became separated from his family in the flight. By Guerchom Ndebo (AFP)

After a brief period of calm, the rebels went on the offensive again in October, capturing swathes of North Kivu province and forcing hundreds of thousands to flee.

"The scale (of the humanitarian crisis) completely changed after this offensive," said Anne-Sylvie Linder, head of the International Committee of the Red Cross in North Kivu.

Fighting in the province displaced about 370,000 people by November 28, according to the IOM, compared to about 90,000 in late October.

Conditions in camps such as Kanyaruchinya are shocking, Linder added, explaining that aid organisations are struggling to respond to the massive movement of people.

Among myriad other problems, there is little fresh water in Kanyaruchinya and the rocky lava field makes digging adequate latrines impossible.

Most of the displaced people sleep with just a blanket laid over the rocks. Regular downpours due to the Democratic Republic of Congo's rainy season make conditions all the more wretched.

Diela Bazi, 20, a secondary-school student, next to his shelter. He looks after his siblings after they were separated from the rest of the family during their escape from their home in the village of Rugari. By Guerchom Ndebo (AFP)

Cholera has also recently broken out, with 21 confirmed cases as of Monday, according to a humanitarian official who requested anonymity.

"Cases have tripled every week for three weeks," said Marie-Pierre Poirier, UNICEF's west and central Africa director, during a visit to Kanyaruchinya the same day.

The growing numbers of displaced people is a problem taking on "exponential dimensions," she warned.

'We need to go home'

Theo Musekura, the president of a displaced people's committee, said about 50 people had already died of illnesses such as cholera, malaria and diarrhoea.

A local hospital offers treatment, but "there are too many people," he said.

Eighty percent of the displaced people in Kanyaruchinya are Congolese Hutus from the Rutshuru area of North Kivu, Musekura estimated.

"They fled because when the M23 comes, they kill people," the 48-year-old said matter-of-factly.

People displaced by the fighting in eastern DR Congo await a distribution of aid by UNICEF. By Guerchom Ndebo (AFP)

The danger remains close by. Kanyaruchinya lies several kilometres (miles) from the front line, which has been quiet in recent weeks.

Standing in drizzle by the roadside in Kibati -- just north of Kanyaruchinya and about 10 kilometres (six miles) from the front -- Adela Mufasano said she and her children needed to go home.

"The kids sleep on the rocks," the 54-year-old said. "When the rain comes, it's a catastrophe".

Andre Bahati Musarumu, watching men play cards in front of a tent in Kanyaruchinya, also said he wanted the situation to end.

"We want to go home to look for food," said the 60-year-old, who fled with eight children.

"The government needs to decide between negotiation and war."

Deadline for debt exchange programme may be extended again –...
13 minutes ago