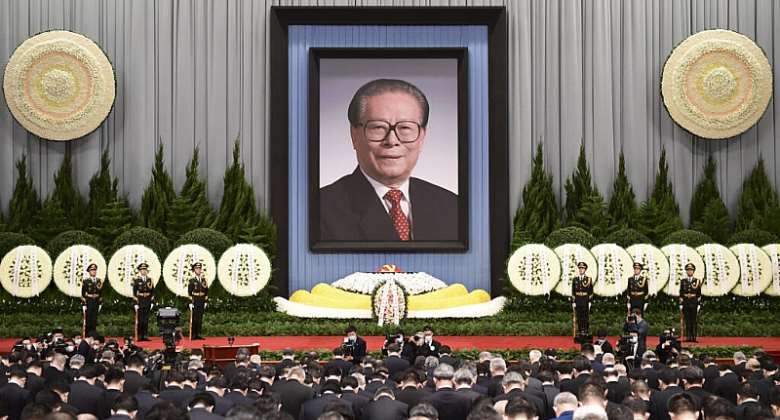 Sirens wailed across China as the Communist Party eulogised late leader Jiang Zemin Tuesday, hailing him as a patriot who "dedicated his life" to the country. But the official press didn't elaborate much on his economic feats – institgated by Jiang's patron Deng Xiaoping, the man who opened China up to the world.

China held a day of mourning across the country, with security services ensuring there were no large gatherings on the streets following rare protests in recent weeks.

Jiang died in Shanghai last Wednesday at the age of 96 and left a mixed legacy, taking power in the aftermath of the 1989 Tiananmen Square crackdown and leading China towards its emergence as a powerhouse on the global stage.

A public memorial service attended by China's political elite began at 10:00 am local time in Beijing's Great Hall of the People, featuring a giant portrait of the late leader as well as slogans lauding him and a massive flower display.

"He dedicated his whole life and energy to the Chinese people, dedicated his life to fighting for national independence, people's liberation, national prosperity, and people's happiness," President Xi Jinping told assembled party faithful at the hall.

"The CCP Central Committee calls on the whole Party, the army and the people of all ethnic groups in China to turn grief into strength," Xi added.

Looking frail and distraught, Jiang's wife Wang Yeping sat in a wheelchair in the front row.

A nationwide "three-minute silence" was held as sirens sounded.

In Jiang's hometown of Yangzhou, around 100 people gathered in front of his former residence to observe the silence after which they were swiftly dispersed by police.

Flags across the country were at half-mast as were those at Chinese government buildings overseas.

Hu Jintao's return
Jiang's funeral ceremony also marks the first time since the 20th Party Congress in October that Hu Jintao, Jiang Zemin's successor as CCP Secretary, appears in public. At the last day of that congress, Hu was unceremoneously removed from his desk.The official Xinhua News Agency later said that Hu suffered from health problems, but China observers saw the move as a major humiliation, underlined by Xi Jinping demoting some of Hu's most trusted lieutenants from the party's top echelons.

On 6 December, the People's Daily, the official mouthpiece of China's Communist Party mentioned that Hu Jintao, "also went to the hospital to pay his respects to Comrade Jiang Zemin." In a picture showing lines of top level officials dressed in black and wearing surgical mouth caps, Hu is also mentioned as one of China's top leaders attending the ceremony.

The death of China's leaders tend to give a glimpse into the minds of their successors. In an editorial in Tuesday's People's Daily, there is a rare reference to the June 4, 1989 mass demonstrations that were quelled by the People's Liberation Army, costing the lives of an as yet unknown, estimates vary between one hundred and several thousand- number of deaths.

Jiang was party secretary in Shanghai during the 1989 Tiananmen uprising and managed to calm the population without resorting to military violence – as a result he was promoted to the party's General Secretary.

According to the article, Jiang then steered the CCP through "serious twists and turns occuring in world socialism" (read: the fall of the Berlin wall in 1989 and the following demise of communism in Eastern Europe).

And the reforms?
Interestingly, Jiang's eulogies contained only few references to Deng Xiaoping, Jiang's mentor and the father of China's policy of open door to the west and economic reforms. Deng's thoughts on the "construction of the military for a new era" were mentioned specifically, but no further stress was given to Deng's radical plans to shift away from the class-struggle dominated central planned economic policy of his predecessor Mao Zedong.

Instead, the editorial stresses Xi Jinping's signature "Chinese rejuvenation" slogan which is aimed at "pusching China to embark on a new journey of comprehensively building a modern socialist country," and repeating that the CCP's "original mission has always been the strong leadership core of the cause of socialism with Chinese characteristics."

In other words: the party stays in firm control of everything, including the economy. The era of Deng's (and Jiang Zemin's) sometimes adventurous economic expermiments seems to be finished for now.

Jiang died of leukaemia and multiple organ failure after medical treatments failed, according to state media.

His body was cremated Monday in Beijing at a ceremony attended by President Xi and other top leaders, Xinhua said.

Deadline for debt exchange programme may be extended again –...
37 minutes ago