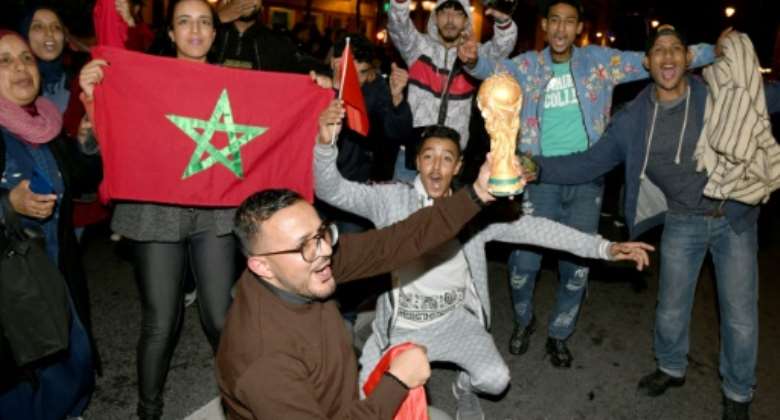 Moroccans in Rabat cheered and sang after their team beat Spain at the World Cup. By - (AFP)

With shouts, songs, cries and tears, Moroccans exploded with joy Tuesday as their football team beat Spain to reach the quarter-finals of the World Cup for the first time.

"There were millions behind Morocco -- this team represents a spirit, a union," said Imad Ait Ounejjar, from a noisy, crowded restaurant in the coastal city of Casablanca.

"This victory is for Morocco, Africa, the Arab world and all the nations that believed in us. We are proud to be Moroccans," added the young man, who works as a project manager.

Morocco is the last remaining team from Africa and the only Arab team left in Qatar, and will face either Portugal or Switzerland in a quarter-final on Saturday.

"I can't believe it, this team is performing miracles! It's so beautiful!" said Lamia Afria, 24. "I feel proud, we did the unthinkable."

For the loyal supporters of the Morocco's team -- dubbed the "Atlas Lions" -- it was a dream come true after long years of waiting and frustration.

Crowds in Morocco cheered their team to victory over Spain at the football World Cup in Qatar. By - (AFP)

Supporters, both men and women, wrapped in red national flags or wearing the team strip, kept up a solid chant of support for their sporting heroes.

After the victory, the crowd chanted as one: "Next!" and then "Always with Morocco."

Before Tuesday's game, Morocco's best result at the football World Cup had been in 1986, when they reached the last 16.

Morocco's supporters in the Libyan capital Tripoli celebrate after their team beat Spain in the World Cup. By Mahmud Turkia (AFP)

The epic duel took on the appearance of a derby: mainland Spain is only some 14 kilometres (nine miles) from Morocco, visible across the Strait of Gibraltar at the entrance of the Mediterranean Sea.

But beyond the sporting clash, Rabat and Madrid share common interests, including economic, as well as the fight against irregular immigration.

After a diplomatic quarrel lasting almost a year over the issue of the disputed territory of Western Sahara, Spain and Morocco drew a line under the spat in mid-March.

National team star Achraf Hakimi, whose chipped kick settled the penalty shootout for Morocco, was born in Madrid and has played for Real Madrid.

But the Atlas Lions have also won hearts outside Morocco, with scenes of jubilation erupting in Syria, Saudi Arabia and the Palestinian enclave of Gaza after the kingdom's group matches.

Palestinian supporters even improvised a song in honour of the Moroccan team.

Morocco's players unfurled a Palestinian flag during their on-pitch celebrations after their stunning World Cup victory.

Even in a context of acute tension between Morocco and neighbouring North African nation Algeria, football has managed to bridge a gap.

"Your brothers and neighbours are with you," wrote Algeria's DZfoot Twitter account, which has more than one million followers.

"Far from all the hateful and malicious trolls of social networks, the Algerian people are behind the Moroccan people", DZfoot added.

'Help me make I help you' —Ken Ofori-Atta's full speech on D...
6 minutes ago