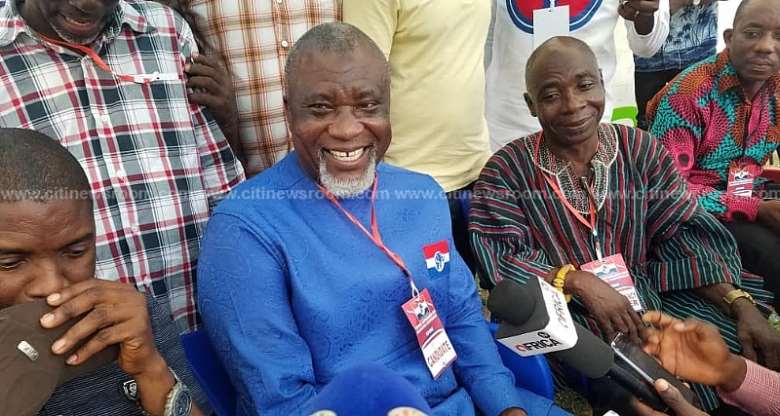 The widely alleged and reported dismissal from his National Security Agency (NSA) job was practically self-engineered by My Dear Brother Hopeson Adorye Himself. For this reason, the longtime close associate and staunch lieutenant of the late Mr. Kwadwo Owusu-Afriyie – aka Sir John – the Kennedy Ohene Agyapong ousted General-Secretary of the now-ruling New Patriotic Party (NPP), has nobody else but absolutely only himself and those cynical party-poopers and Asante Ethnic Supremacists to blame for prematurely and inadvisably deciding to impose the decidedly morally and strategically untenable and patently unattractive candidacy of Mr. Alan John Kwadwo Kyerematen, the Trade and Industry Minister in the governments of both former President John “Kofi Diawuo” Agyekum-Kufuor and Nana Addo Dankwa Akufo-Addo (See “ ‘God Will Cater for Us’: Watch Hopeson Adorye Announce His Dismissal from National Security Post” Ghanaweb.com 11/27/22).

He literally shot himself in the foot, when the sometime Akufo-Addo Kingmaker’s Assistant boldly and foolishly decided to defy “God,” as well as the “gods” of the fortunes of the Danquah-Busia-Dombo-inspired neoliberal political establishment. Alan Kyerematen, truth be told, is absolutely in no way a strategically fetching or politically attractive Presidential Candidate that the leadership of the New Patriotic Party could wisely and comfortably settle on because the Asante-Akyem Bompata, Edweso (Ejisu) and Pataasi native has indelibly and nauseatingly demonstrated that he is too arrogant and too full of his own self-importance to constructively play with the team and on the team and for the team, as it were. His very decision to imperiously renounce and resign his party membership in the wake of his seismic 2007 party presidential primary defeat to the now-President Addo Dankwa Akufo-Addo, is still fresh and raw in the minds of many a party stalwart and loyalist and aptly deemed to be a heinous act of sacrilege that is highly unlikely to be forgotten anytime soon in our lifetime, which means at least for the next 20 years or many more years to come.

In all this, the most memorable words to bear in mind as the party and the nation head towards another watershed electoral season are those of the revered and the immortalized Mr. Joe DaRocha, the first National Chairman of the New Patriotic Party, who wasted much of his precious time and energy trying to resolve what Alan Cash, as Mr. Kyerematen is also popularly known, claimed to be his epic grievance with the triumphant Akufo-Addo Presidential-Election Campaign Team with barely four months to the casting of the ballot in the 2008 General Election. Well, after cunningly and almost predictably giving party leaders the run around or, literally, taking them on a wild-goose’s chase, as Americans are wont to say, the Cash Man, finally, issued a public statement in which he emphatically pooh-poohed any possibility of having his vanquished team of supporters and ardent Akufo-Addo detractors harmoniously collaborate with the post-primary triumphant Team Akufo-Addo.

Now, Dear Reader, imagine, for a moment, what would have happened to party unity if in the wake of his 1998 presidential-primary election defeat by Candidate John Agyekum-Kufuor, a brutally ego-bruised and sulking Nana Addo Dankwa Akufo-Addo and his supporters and his electioneering-campaign team had decided not to have any symphonic trucking with the triumphant Team Agyekum-Kufuor, of which team, by the way, Mr. Kyerematen was a prominent member and a key player, whatsoever. It is this egregious failure to see and reckon with reason and common sense that highly likely resulted in the summary dismissal of Mr. Hopeson Adorye from his cushy National Security Agency job. At this juncture, it really does not matter which members or operatives of the Akufo-Addo Presidency colluded in the decision to cut the longtime Sir John associate loose, as it were. Rather, what really matters here is for both critics and observers to critically examine the considerable internal political damage or hemorrhage that Mr. Adorye had already wreaked and was still wreaking on the fortunes of the New Patriotic Party in the runup to the 2024 General Election.

It is also quite obvious that Mr. Adorye harbors quite a bit of the stereotypical contempt that a significant percentage of the Ewe, especially the Anlo-Ewe, are known to harbor for or against Northerners and all things Northern, a phenomenon that Ghanaians had more than ample opportunity to witness vis-à-vis the globally infamous and bloody Rawlings-Tsikata faux revolution or military intervention that savagely toppled the Nkrumah-leaning Dr. Hilla “Babini” Limann-led People’s National Party (PNP). Here, though, those of us avid supporters and self-appointed strategists of the New Patriotic Party are far more concerned about the high likelihood of a reprise of Candidate Mahama’s “Presidential Spare-Tire” gimmickry, which the Bole-Bamboi native, from the Akufo-Addo-created Savannah Region, played up to the seismic effect and to a bountiful electoral harvest in the runup to the 2012 Presidential Election in Tamale, the capital of the Old Northern Region which had, of course, included the present-day Savannah Region.

In short, allowing a repeat of the Mahama Presidential Spare-Tire Gambit to strike a chord with the electorate, especially Northern-Descended Voters, should the Kyerematen Gang succeed in sidelining the strategically winsome candidacy of Vice-President Mahamudu Bawumia, in the runup to the 2024 Presidential Election, would definitely constitute the most inexcusable political suicide on the part of the leadership of the New Patriotic Party. It could almost certainly cause the definitive disintegration of the Elephant Party, as all well-meaning and progressive-minded Ghanaian voters and the citizenry have come to know the same. Some real food for thought, Dear Reader. Isn’t it?