Of ‘karma’ And ‘dark Energy 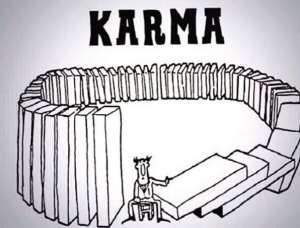 ON Sunday 4 December 2022, I settled down to watch the excellent football matches that I knew the World Cup tournament of 2022 was about to serve up.

But an item of news I read stole my interest away from the live matches about to be played, to those that had already been played.

I was concerned with one match in particular

The news item read as follows: QUOTE “Uruguay is going home, this is karma for me – Asamoah Gyan

“The former Ghanaian striker and Captain of the ... Black Stars, Asamoah Gyan, says Uruguay’s exit from the ongoing 2022 FIFA world cup is ‘Karma’ for him.

“This was after Uruguay beat Ghana 2:0 in their last game on Friday, December 2, 2022. Although he was not happy that Team Ghana had been ousted from the game, Asamoah Gyan felt Uruguay was being punished for what it did to Ghana 12 years ago, at the 2010 World Cup.

“He said that even though Uruguay scored [against Ghana] in 2010 and left [for home] laughing, today, the team, especially Luis Suarez, is leaving crying. [He attributed] this to Karma.

“They’re going home, and this is Karma for me,” Asamoah Gyan said on Super Sports TV, [where he was working] as a panellist. Earlier in the game against Uruguay, Ghana had a penalty, but the Black Stars’ captain, Andre Dede Ayew, missed the penalty.” UNQUOTE

I was rather intrigued by Asamoah Gyan’s choice of words. I am aware that many Ghanaian players, like many others in Africa, resort to occult practices (humorously called “African electronics’’ by certain acquaintances of mine!) Before they participate in serious soccer tournaments.

These occult practices are said to include visits to cemeteries in the dark of night, to “invoke” spirits; trips to Mali and/or Guinea, to consult “marabouts” and a deity in the area called “Kankan Nyame”; the wearing of “invincibility amulets” and/or leather belts, with sheaths that contain “sacred” Islamic passages chosen by trusted Mallams.

Others consort with indigenous deities, such as Antoa Nyamaa, or go through rituals during which they pay homage, as per ancient traditions, to powerful River-gods.

O) f course, many of these occult practices fail to produce the desired results, but our players nevertheless rationalise their failure as the result of them (the players) possibly having broken one of the numerous and mysterious taboos associated with the unaccustomed wearing, on their person, of strange talismans; or failure to observe the laws of sexual abstinence prescribed by the spiritualists. It never occurs to the players that their failure might be due to the uselessness of the magical objects and practices allotted to them.

But Karma is a completely different kettle of fish. It is strongly believed in by Indians and other Asiatics, who define it as “the mystical force generated by a person's own actions”. Its force takes the form of “ethical consequences” brought about by “a person’s own actions”.

Which means that Uruguay’s filthy trick perpetrated against Ghana in 2010 was directly responsible for Uruguay’s inability to progress to the quarter-finals in the 2022 competition? That Uruguay did beat Ghana once again would be insignificant in Karma terms, as the ultimate prize desired by Uruguay was steady progress towards winning the main prize – the Word Cup.

I would have liked to find out from Asamoah Gyan whether he thought Ghana’s own exit from the competition might be related to Ghana’s own spiritual status.

First of all, why didn’t “reverse Karma” work in favour of Ghana, so that having been the victim of cheating in 2010, she would benefit from a compensatory act in 2022 by stepping over “sinful Uruguay” into the next group?

In saying that, I am not unaware that Karma and concepts of that ilk have their own operative laws, that often seem crafted to baffle and confuse humans who try to use human logic or common sense to assess the convoluted actions and consequences that govern the dictates of the spiritual forces humans consult.

Besides, mysteries abound in human-stroke-ethereal-force interactions. For instance: from my own observations, I have come to realise that some dreams come true in our lives, while others do not. Why the dichotomy?

Even more puzzling is the fact that one can physically hurt oneself, as a result of dreaming. (Recently, I personally had a “daytime-nightmare”, in which I was trying to evade an object that was about to hit me. The result was that I kicked a table near the sofa on which I was taking a nap, and have been nursing a painful swelling on one of my ankles ever since!)

The reader will no doubt be acquainted with another puzzling phenomenon, rather prevalent among youths with a strong sexual drive, namely, “the wet dream” paradigm.

My question about such experiences is this: if dreaming can result in real physical consequences to our conscious selves, then why can’t the reverse also occur, so that when we dream, we can will certain events to materialise within the context of the dream, especially desired endings? And – I repeat -- why do some dreams actually come true in real life, while others patently do not?

Of course, I have no answers to such puzzling questions. But I do acknowledge, from personal experience, that there are serious and mysterious “unknowns” in the life into which we have been thrust.

For instance: what is the universe? Is there only one or are there many?

Why are there both matter and anti-matter? And what is the difference between those particles and “dark matter”?

Finally, what is the relationship between “dark matter” and “dark energy?”

If (as is largely agreed by physicists) about 90% of the universe consists of a “dark energy” whose elemental constituents are still unfathomable to even the brightest scientists, then why cannot parts of our lives also be ruled by a “dark energy” of a sort we cannot yet identify or understand?

In that respect, can African beliefs that unknown energies exist in trees, rivers and lakes, and certain among our fellow creatures, such as animals and birds, be dismissed out of hand?

In discussing the Ghana-Uruguay debacle, Asamoah Gyan limited his evaluation to what might have happened to Uruguay in terms of Karma. I wonder whether he would like to venture an opinion -- also -- about why what happened to Ghana happen.

Ghana had done nothing against anyone. Yet she was kicked out of the tournament. Is it possible that Ghana too was afflicted with Karma but that the Karma that affected her was the consequence of her own actions against herself?

For (let us assume) the”dark energy” that exists in Ghana occurs in our rivers and water-bodies. This is a serious issue, for the Asantes; for instance, regard River Tanoh, as a “holy” river from eternity [Asubↄnten Kronkron firi tetetete].

So “holy” do the Asantes regard Tanoh to be, in fact, that they do not allow women who are in their menstrual period, to cross the river, even in a canoe! Entering the river physically when a woman is in such a state is totally inconceivable, of course, and for a good reason, namely, that the sanctity of the river is inviolable. This sanctity, of course, has a physical and practical dimension, namely, that the RIVER WAS SO PURE IN ANCIENT TIMES THAT ITS WATER COULD BE DRUNK BY DIPPING A CUPPED HAND INTO IT AND SWALLOWING WATER DIRECTLY FROM IT! OR BY USING THE LEAVES OF THE AWAHA (a SMOOTH-LEAFED PLANT) AS AN IMPROVISED CUP!

Many other Rivers in Akan and Asante communities share the same attributes of sanctity as Tanoh does.

At Asiakwa, my own ↄnative town in the Eastern Region, a small River called Twafoↄ was given its own “shrine-house” and had a priestess who dressed up at festivals and went about gurgling loudly like water falling over rocks: Gugu-gugu-gugu-gugu! She called her River “Twafo Yaw, asuo ketewa an oyiri pԐbrԐ!” [Twafoↄ the Male Born on Thursday; the small river that floods its banks in the dry season!)

The “energy” created in our communities by their reverence for Nature and its creations, such as Rivers and Lakes, and the flora and fauna, generally, is what has constituted the backbone of our societies, to keep them strong enough to survive diseases and pandemics; internal warfare and colonisation by strong, foreign armies anxious to steal our gold and other minerals, and capture our people to sell them into slavery.

But today, what do we see? What is happening to Tanoh, along with Pra, Offin, Ankobra, Oti, Birem, Densu and other once-mighty and revered Rivers? After sustaining the people of Ghana for thousands of years, they are no longer respected. Sons of the soil of Ghana can take brutal-looking excavators and bulldozers into our revered Rivers and ruthlessly employ such machinery to turn the riverbeds upside down and inside out – in search of gold.

Sons of the soil use mercury and cyanide to wash River soil and River sand in search of gold. Cancer can result from such activities? They don’t care.

Ghanaians bring Chinese technicians to operate machines hitherto unknown to us – changfans – which they park on our Rivers like vehicles in a car park.

So much so that officials of the Ghana Water Company and the Ghana Water Authority are warning that within six month – REPEAT: SIX MONTHS! -- they will have to shut down their plants at Osino, Bunso and perhaps Kyebi, because of the extreme turbidity of the water which they purify by machines before they can pump it into our people’s homes.

The officials warn that already, the budgets laid down for them to pump water is overspent, because instead of buying X quantities of chemicals to purify the water, they are forced to buy Y quantities. A time is coming (they say) when even if we have money to buy chemicals, the turbidity of the water will be so severe that the achiness can’t use the “alleged water” at all. The machines were bought to process water, not mud (the officials add.) [Please Google “galamsey + roundtable+CitiTV] to hear the full story from the lips of the officials themselves]

We’ve got all this trouble because we won’t use all the force at our disposal to end the wicked practice known as galamsey. We all know what it is. We all know who is behind it. And in truth, some of us are doing our very best to stop galamsey in its tracks. (See, for instance:

But many other traditional authorities, perhaps too corrupt to act against galamseyers from whom they have taken money, are too much afraid to do anything about galamsey.

We shall pay a heavy price for destroying the heritage that Nature gave us that enabled us to build a prosperous Nation called Ghana. I would not be surprised if our punishment by Nature has already begun.

For who is to say that it is not the powerful forces of Nature, in the form of “dark energy” and “dark matter” that have heard the plaintive early-morning cries of our water-bodies, and have decided to collaborate with Karma to ensure that Ghana, having made herself “unworthy” of advancing in World Cup 2022 by failing to protect her Nature-endowed water resources, should be kicked out!

And if you don’t believe that, maybe you’d better take a crash course in what I call “metaphysical physics”!