Ghana must increase capital expenditure to 20% to drive growth — ISSER 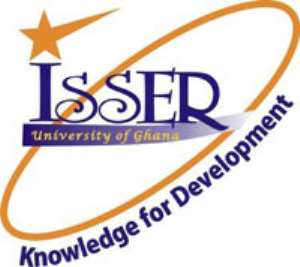 The Institute of Statistical, Social and Economic Research (ISSER), says, Ghana must increase its capital expenditure (CAPEX) to 20 per cent, to help with structural economic changes for sustainable growth and development.

This comes, following the observation by ISSER that Governments, overtime, had not made enough of its income to finance Ghana's productive sector, particularly, agriculture and manufacturing, through increased CAPEX allocation.

In the 2023 budget for example, the Government is looking to expend a total of GHS205,431 million (25.6 per cent of GDP) – including clearance of arrears, with the projection for compensation and interest payment, all higher than CAPEX.

This situation, Professor Peter Quartey, the Director of ISSER, bemoaned and called on the Government to cut down on the size of the current Government and push money saved through fiscal discipline into the agric and the manufacturing sectors.

He said: “It's been established that for CAPEX, investment must be between 15 and 20 per cent of your income – GDP in order to grow substantially. In the past, we've been doing about eight to 10 per cent but now, CAPEX is woefully inadequate.”

Prof Quartey, said this in an interview with the Ghana News Agency on the side lines of a review of the 2023 budget statement on Tuesday in Accra.

The Director of ISSER said: “When you look at the 2023 budget, we're going to spend about 18 billion on the education sector and less on agric and industry, and this shouldn't be the case.”

“We should invest more into value added agriculture – we've not done enough irrigation, processing, and storage of agric products. It's the same with manufacturing. But if we're able to help industries set up and provide them with guaranteed credit for the manufacturing sector, we'll create more employment.” He said.

He was optimistic that the International Monetary Fund (IMF)-supported programme would increase investor confidence and increase Ghana's ability to enter into new bilateral agreements and access the international capital market.

“We've borrowed to finance infrastructure and a lot of Government projects, hopefully, when we sign on to the IMF programme and other bilateral and other donors come on board, we'll be able to enhance our CAPEX.” He said.

He, however, called on the Government to ensure that there was the buy-in from the populace as well as both sides of Parliament to ensure a successful implementation of the Fund's support programme.