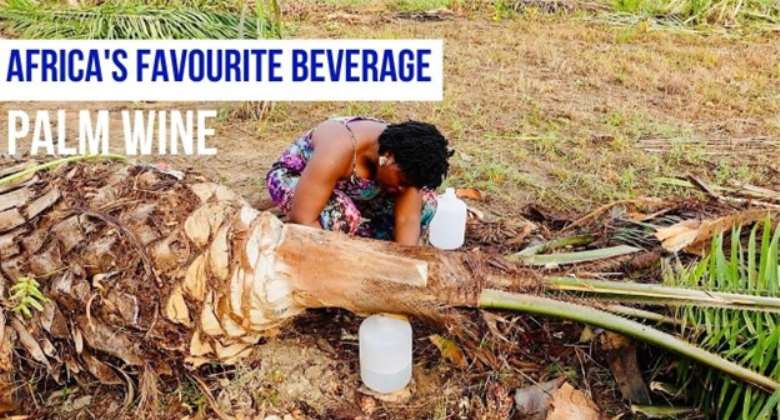 Palm wine is the sap of a palm tree (family Palmeae) obtained as the fermentation product of a 24-hour tapping. Palm wine contains potassium which has been proven by research to improve heart health and reduce hypertension. Palm wine contains vitamin B2, also known as riboflavin. Riboflavin helps in the fight against free radicals

There is more to this drink. It’s loaded with nutrients and has a bevy of health benefits. It is often added to various herbal medicines or products and is said to be a nourishing drink that promotes lactation and improves eyesight due to its yeast content.

The yeast contained in palm wine has been reportedly used for industrial purposes such as baking and the production of alcoholic drinks or potable ethanol.

Palm wine has many health benefits, especially when consumed fresh. It is good for our health if it is taken in pure form. The point needs to be made that commercial palm wine is regularly adulterated with narcotic agents obtained from the regular herbal source. Preservatives and sweeteners distort the originality of the wine, therefore making it not good for our health. However, in its natural form, it has the following scientific backings:

Another study led by Prof. Shahidul Islam of UKZN’s School of Life Sciences, together with two postgraduate students of the Federal Institute of Industrial Research Oshodi, Lagos, Nigeria, have collaborated on research showing that the consumption of raffia palm wine may help fight Type 2 diabetes which affects male sexual organs. The study was conducted on animals and found that palm wine lowers blood glucose levels and has less evidence of oxidative stress on testicular tissue. They concluded that raffia palm wine has therapeutic potential to protect against erectile dysfunction or impotence in men with Type 2 diabetes, thus it can be used in traditional medicine. However, they advised on moderation as excessive could also harm our health.

Eyesight: Some schools of thought argued that our grandparents in the village have better eyesight than us because palm wine is their beverage.

Cardiovascular diseases
Studies have affirmed that drinking moderate amounts of palm wine have been associated with a reduced risk of developing cardiovascular diseases such as heart failure. This study was conducted by Lindberg and Ezra (2008). Palm wine contains potassium which has been proven by research to improve heart health and reduce hypertension.

Additionally, another study conducted by Ogunro and Ologunagba(2012) evaluate the effect of the level of palm wine consumption on cholesterol levels among rural dwellers. In this study, fifty-eight male volunteers between the ages of 28-69 yrs were recruited. They were divided into two groups; 28 moderate drinkers with an intake of 20-70 grams/day and 30 heavy drinkers with an intake of >70 grams/day of palm wine at a sitting for 3 to 4 days per week with a minimum duration of 5 years. Thirty controls of the same age groups with the same socioeconomic status were recruited. Their lipid profiles were tested. They revealed that heavy consumption of palm wine may promote cholesterol factors, but the benefits of moderate consumption recorded need further investigation.

Healthy hair, skin, and nails: The iron and vitamin B complex found in palm wine is needed for healthy skin, hair, and nail. Iron is essential for the development, growth, and functioning of some cells in our body. This property of palm wine makes it helpful in promoting wound healing by repairing our tissues and promoting the growth of healthy cells.

Stomach disorders
In folk medicines, palm wine is mixed with other herbs and used for treating stomach disorders. For instance, one old study by Ibu et al.(1986) examined the effect on 40 albino rats of both sexes. It was found that palm wine orally caused a 21.8% decrease in gastric acid secretion. But 4% ethanol caused a significant increase, while 12% sucrose caused a significant decrease in gastric acid secretion in rats. This inhibitory effect of palm wine may be of clinical significance in the management of peptic ulcer patients and ulcer-prone subjects in this region.

However, another study on humans did not find any positive effect on ulcers though it contained ethyl alcohol (5%). The study was conducted by Osim et al. (1991) and used only seven volunteers.

Take home
Palm wine is nutritionally important because it is an excellent source of probiotics, nicotinic acid, thiamin, vitamin C, protein, and riboflavin. It contains sugar, protein, carbohydrate, amino acid, Vitamin C, yeast, potassium zinc, magnesium, iron, and vitamins B3 and B6. Studies on stomach ulcer treatment appear mixed. Animal studies confirmed that palm wine is an antidiabetic agent, that lowers cholesterols and many more. We need more human studies on the effect of palm wine on our health.

NB:
Prof. Nyarkotey has strict sourcing guidelines and relies on peer-reviewed studies, academic research institutions, and medical associations to justify his write-ups. My articles are for educational purposes and do not serve as Medical advice for Treatment. I aim to educate the public about evidence-based scientific Naturopathic Therapies.