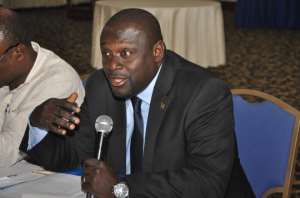 A former Member of Parliament for New Juaben South, Mark Assibey-Yeboah has lauded the launch of the Government’s Domestic Debt Exchange Programme but said it is not deep enough.

The former Parliament Finance Committee Chair said the programme is a softer way of protecting investments while restructuring the country’s debt ahead of the $3 billion International Monetary Fund (IMF) facility that the Government is seeking to secure.

“I will even say that the exercise has not been deep enough because from what we are hearing, individual bondholders are excluded, and there are no haircuts on the principal as it were and there have been some concessions if you like, so I think this is the softer way to go,” Mr Assibey-Yeboah told Eyewitness News host Umaru Sanda Amadu on Monday, December 5.

As part of measures to restructure the country’s debt burden, government launched the debt exchange programme.

The Minister for Finance, Ken Ofori-Atta speaking during the launch of the programme on Monday, December 5, 2022, said the objective is “to invite holders of domestic debt to voluntarily exchange approximately GHS137 billion of the domestic notes and bonds of the Republic, including E.S.L.A. and Daakye bonds, for a package of New Bonds to be issued by the Republic.”

The Minority Caucus in Parliament rejected the programme, citing financial dishonesty on the part of President Akufo-Addo and his Finance Minister, and said the programme would visit more frustration on investors and deprive them of their returns on investment.

Mr Assibey-Yeboah on Eyewitness News noted that, as part of the requirements for securing an IMF facility, the requesting country ought to restructure its debt before help is granted and this is the softer way to go.

“The IMF Programme is dependent on this debt restructuring, so before we can sign up for the programme, we need to restructure our debt. Our debt has become unsustainable, in simple terms, we simply cannot repay our debts, and we have to do something about it.

“The Government has admitted that the only way out of the economic mess is for us to sign up for an IMF programme and this has become a prerequisite for signing up for the programme and so if we don’t restructure our debt, we cannot have the programme in place.”

He added that the International Monetary Fund does not direct requesting countries on how to restructure their debt, and the government establishing an exchange programme for treasury bill holders and bondholders is a laudable one that needs to be supported to pave way for the start of the IMF’s intervention.