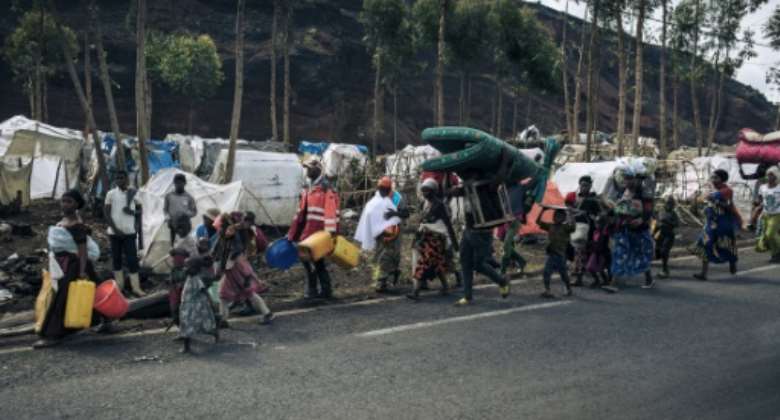 Thousands of people have been displaced by fighting in the eastern Democratic Republic of Congo. By ALEXIS HUGUET (AFP)

Around 300 people died in an attack on villagers in eastern Democratic Republic of Congo last week blamed on the M23 rebel group, government minister Julien Paluku said on Monday.

The government has been locked in a months-long conflict with the notorious armed group M23 -- with the latest violence coming just five days after a ceasefire was agreed between the rebels and Congolese forces.

The army originally accused the M23 insurgents of killing at least 50 civilians in Kishishe village in eastern North Kivu province last week, before the government put the number of dead at more than 100.

But Paluku and government spokesman Patrick Muyaya laid out updated figures for the deadly attack during a press briefing on Monday, citing data collated by civil society and communities in the region.

"We are looking at around 300 deaths" of "people known to be regular inhabitants of Kishishe," industry minister Paluku said, saying the victims had no connection with militia groups.

"Every community has been able to record the people who died from units in Kishishe and its environs," said Paluku, who was governor of North Kivu province from 2007 to 2019.

"One community alone has more than 105 deaths," he added.

The rebel group has denied it was responsible and called the allegations "baseless" -- although it said eight civilians were killed by "stray bullets" during clashes in the village on November 29.

All the fatalities were civilians and at least 17 believed to be children, Muyaya told reporters, saying there were fatalities recorded from a church and a hospital.

The UN's peacekeeping mission in DR Congo has led calls for an investigation after the government said 50 villagers had been massacred by a notorious armed group in the country's troubled east.

Representatives for the United States and European Union said the killings were potential war crimes, while Human Rights Watch said UN troops should be deployed to protect survivors.

The government has said it is difficult to confirm the data because the area is still under rebel control.

Muyaya said consolidation work was underway to try and ascertain the full number of victims.

Residents who spoke to AFP by telephone said they had been ordered by the rebels to bury the victims in mass graves.

The March 23 movement, or M23, is a predominantly Congolese Tutsi rebel group that was dormant for years.

It took up arms again in November last year and seized the town of Bunagana on the border with Uganda in June.

After a brief period of calm, it went on the offensive again in October.

Kinshasa accuses its smaller neighbour Rwanda of providing M23 with support, something that UN experts and US officials have also pointed to in recent months.

Kigali disputes the charge and has accused Kinshasa of collusion with the FDLR -- a former Rwandan Hutu rebel group established in the DRC after the genocide of the Tutsi community in 1994 in Rwanda.

Talks between the two countries in the Angolan capital Luanda unlocked a truce agreement on November 23.

The ceasefire was scheduled to take effect on November 25. It should also have been followed by a pullout by the M23 two days later from territory it had seized, but this did not happen.