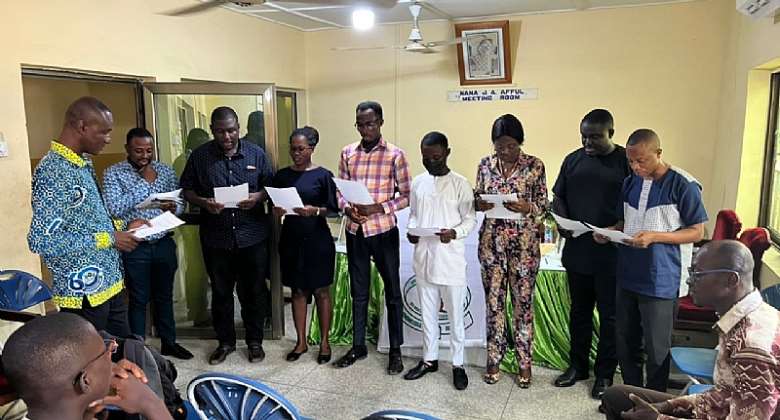 Swearing in of the National Officers of OBOSA

The Oti Boateng Old Students’ Association (OBOSA) has elected its national officers to steer the affairs of the association at a conference/annual general meeting (AGM) in Koforidua in the Eastern Region.

The newly elected officers were duly sworn into office by the headmaster of the school to begin their tenure as national officers of the association.

The aim of the association is to, among other things, provide a means of fellowship within the Oti Boateng Senior High School (OBOSS) fraternity, encourage members to render practical service to and on behalf of the school, support the welfare of members, promote overall development of OBOSS, promote and protect the integrity of OBOSS, help members to appreciate the unity of the association in its diversity and to promote a sense of belonging to an academic world.

Speaking at the conference, the Headmaster of OBOSS, formerly called Koforidua Secondary School (KOSEC), Mr. John Arthur said the school is currently the 15th best school in the country and 3rd in the Eastern Region.

Mr. Arthur indicated that the ranking was based on the 2019 West African Senior School Certificate Examination (WASSCE) performance national breakdown.

He revealed that the school had become a force to reckon with due to the strict disciplinary measures put in place.

He highly commended the teachers and non-teaching staff of the school for their commitment and dedication. He also called on old students of the school to come to the aid of the school, adding that they needed to take an active interest in the activities of the school.

The elections were supervised by Mr. John Arthur, Headmaster of OBOSS; Rev. Samuel Ofori-Asare, the Chaplain of OBOSS, and Dr. Henry Ntikora, Representative of Old Students' Association on the school board.

In an acceptance speech, Mr Samuel Kwesi Appah-Peniel, the newly elected President of Oti Boateng Old Students’ Association (OBOSA) called on members to unite in order to push for the agenda of the association for the total benefit of OBOSS.

The association also unveiled its new logo and adopted a new constitution during the AGM held on Friday, 2nd December 2022 at the S.C. Appenteng Hall in Koforidua.