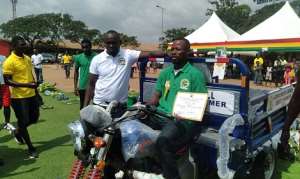 The Mayor of Kumasi, Hon Samuel Pyne last week Friday at the joint Farmer's Day Celebration between the Kumasi Metropolitan Assembly and the Ashanti Regional Coordinating Council (ARCC) at Jubilee Park encouraged farmers to embrace other measures that could add value to their produce and animals they rear.

The Mayor said the theme for this year's celebration "Accelerating Agricultural Development Through Value Addition" was appropriate since the country can only accelerate agricultural development by adding value to the raw materials they grow and animals they rear.

"I find this theme very timeous and relevant due to the growing sophistication in tastes and demands across the globe", the Mayor noted.

He said for a sector that caters for a fifth of the Gross Domestic Product (GDP) of the Ghanaian economy, it should not in any way be left wanting in government’s developmental agenda.

DETAILS
Hon Pyne stated that global economic growth has been speeding despite occasional hits by recessions and other factors.

He noted that if Ghana’s agricultural sector would keep up with the pace, value addition is imperative in that regard.

The Mayor indicated that value-added agriculture entails changing a raw agricultural produce into a finished product through packaging, processing, cooling, drying, extracting or any other type of process that differentiates the product from the original raw commodity.

"Value addition generally focuses on production or manufacturing processes, marketing or services that increase the value of primary agricultural commodities, by increasing appeal to the consumer and the consumer's willingness to pay a premium over similar but undifferentiated products", the Mayor stated.

CHARGE
THE Kumasi Mayor said if Ghana was to take her rightful place as a major player in the global agricultural space, the way forward will be to move from a largely subsistence level to commercialised agriculture with improved productivity and value addition.

The Government of Ghana, the Mayor intimated has undertaken several programs and initiatives targeted at giving the average Ghanaian farmer the needed support to expand their scale of production.

He added that under the above programs, several farmers in the Kumasi Metropolis and other actors along the value chain have benefitted immensely from the various packages the program affords including but not limited to the distribution of free pesticides to combat the Fall Armyworm menace since this pest was identified in the country and the distribution of breeding stock of pigs, cattle, sheep, goats and guinea fowls to livestock farmers respectively.

"In the course of this year alone, more than Two Thousand (2000) metric tonnes of both organic and inorganic fertilizers have been distributed to Nine Hundred and Fifty-Six (956) male farmers and Six outlets in the Kumasi Metropolis at subsidised rates. This has brought good business and increased income to the beneficiary farmers and the input dealers", he emphasised.