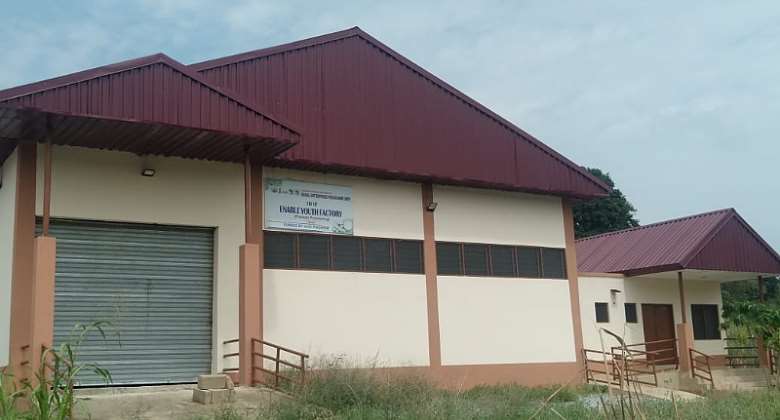 The plantain processing factory established by the Trade Ministry with funding from the African Development Bank (AfDB) at Agogo in the Asante Akyem North Municipal has been abandoned.

This is contrary to an earlier impression created by the Member of Parliament for Asante Akyem North when he spoke in Parliament last Thursday.

The MP, Hon Andy Appiah Kubi on the floor of Parliament claimed that the factory was operational and had started the production of processed plantain exported to Canada currently.

But this reporter during a tour of the facility last Saturday to fact-check the claims by the MP was met by weeds that had grown in and around the compound.

DETAILS:
Seated on about an acre of land, the processing plant seemed complete, but no activity was there as a peep through the main production room showed no evidence of industrial machinery.

With a small gate beside the main one opened, this reporter accompanied by other equally interested media houses gained unimpeded access to film and to inspect the facility.

Having been officially commissioned four months ago, the facility from careful scrutiny showed no sign of human activity and no person was present during the visit despite waiting there for two hours to ostensibly talk to a caretaker or security staff.

Noted for being a community where the growing of plantain is a mainstay business, scores of traders who spoke to this reporter at Agogo said they wished the factory was in operation to help them deal with their post-harvest losses.

MUNICIPAL CHIEF EXECUTIVE
During an interview, the Municipal Chief Executive for Asante Akyem North, Hon Francis Oti Boateng said the Assembly was happy with the establishment of the factory which is not functional.

He noted that they were waiting for the installation of machinery at the factory for work to begin.

"The Assembly would make use of the facility as soon as machines we are waiting to see arrive in February next year", the MCE stated.

CONTROVERSY
Speaking to this reporter, the former MCE for Asante Akyem North, Mr George Frimpong wondered why the MP for the area would deceive Parliament about something that was not functioning.

He claimed that on Saturday morning without prompting, the MP sent some persons to take pictures of his private facility where he is into plantain processing.

Touring the facility later in the day with this reporter, Hon Frimpong said he built his facility for the processing of plantain into biscuits at Domeabra.

With a brand name Plameg, the former MCE said he would have been able to make good use of plantain in the area if Exim Bank had funded his private project which the 1D1F secretariat had planned to adopt.

"Asante Akyem North is predominantly a farming community and we are sure government could use the yet-to-function facility to assist farmers who deal in plantain to prevent post-harvest losses and same way government could fund my project to equally help," the former MCE noted.

Turkey earthquake: Christian Atsu yet to be found
29 minutes ago