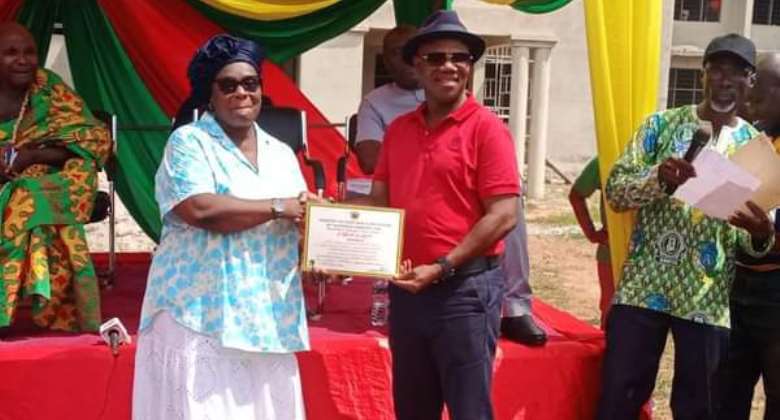 Member of Parliament for Gomoa Central, Hon. Naana Eyiah has lamented that the poor road network in her constituency is affecting the production of foodstuffs and cash crops.

At the 38th Annual Farmers Day Celebration held at Gomoa Afransi in the Gomoa Central District last Friday, Hon. Hon Naana Eyiah noted with concern that farmers have to struggle before they could transport their farm produce.

This she noted has led to post harvest loses as foodstuffs are left to rot in the farms.

"Our gallant farmers find it extremely difficult to transport their farm produce to marketing centers thus leaving them in the bush to rot, even those who could afford to pay for the high transport fares cannot carry enough of what is expected to market them to generate income.

"But thanks to our hardworking farmers, there are abundance of foodstuffs in our communities due to prudent measures put in place by the Department of Agriculture in the Gomoa Central District. I can say for a fact that there are enough food even despite our deplorable road network.

"Interestingly, all our major roads were awarded to Contractors as far back as 2017. Sadly, none of them has been completed and is seriously affecting food and cash crop production inspite of government's efforts to ensure improvement in food production through the Ministry of Food and Agriculture.

"I want to make a passionate appeal to Minister for Roads and Highways, Hon. Kwasi Amoako-Atta to compel the Contractors to come to site to complete the projects or terminate their contracts because it is negatively affecting the image of His Excellency Nana Addo Dankwa Akufo Addo led NPP Government.

"Even though enough has been done for the betterment of the people in the Gomoa Central Constituency, the roads are becoming an eyesore to the NPP as government in power.

"Nevertheless, I must say Gomoa Central Constituency is solidly behind President Akufo Addo and his Government," Hon Naana Eyiah assured.

She congratulated the award winners with the assurance that government through the Gomoa Central District Assembly and her able leadership would support them to expand their farms.

Speaking on the theme for this year's Farmers' Day Celebration "Accelerating Agricultural Development through Value Chain Addition" the Gomoa Central District Chief Executive, Hon. Benjamin Kojo Otoo lauded the theme as being very appropriate at the time when government has extended its clarion call for the private sector to invest in agriculture and to partner with various agencies to add value to agricultural products.

"Here in Gomoa Central, value addition has taken prominence in the agricultural process especially in converting cassava into Gari and Starch and the major producing areas are Afransi, Manso, Nyankuadze, Ofaso, Brofoyedur and Mpota. It is also gratifying to note that palm oil is being extracted from oil palm in commercial quantities in areas such as Afransi, Manso, Dahom and Nsuem. The Gomoa Central District Assembly in collaboration with Modernization of Agriculture has procured and installed Oil Palm progressing machine at Gomoa Afransi," he noted

According to Gomoa Central DCE, opportunities abound in the agric sub-sector as it creates job opportunities for the youth of the district. He encouraged the teeming youth to take advantage and go into agriculture.

"His Excellency the President, Nana Addo Dankwa Akufo-Addo's vision to make Ghana strive again beyond aid led to the implementation of key programmes such as Planting for Export and Rural Development and Planting For Food and Jobs in the agricultural Sub-sector.

"I am proud to say that this year, the Gomoa Central District under the Planting for Export and Rural Development programme has given 36,100 coconut seedlings to 1,601 farmers which accounts for 602 acres of plantation in the District.

"Similarly, 15,300 mango seedlings were also supplied to 255 farmers. A total of 106,600 in all have benefited from the distribution of seedlings initiative which indicates an increase of 39,400 beneficiaries.

"To all those who received awards, I say 'Ayekoo'. You have put in a brilliant effort and dedication and therefore deserve recognition," Hon. Benjamin Kojo Otoo noted.

Ten other farmers were also awarded in various categories.