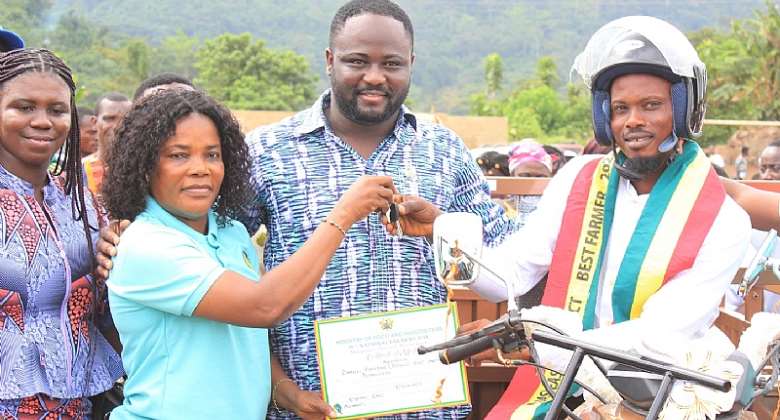 A 32-year-old Daniel Fordjour, a farmer from Diawuoso in the Obuasi East District has been adjudged the District's Best Farmer at the 38th National Farmers’ Day Celebration held at Odumasi.

For his prize, he took home a tricycle also known as 'Aboboyaa', 40 Inches Led Television, GTP Print Wax, Cutlasses, Field Boats, a Certificate of Merit and many others.

Mr. Forjour who could not hide his excitement thanked the Agriculture Department for the good relationship with farmers in the district and also added his voice to calls for young people to venture into agriculture stating that it is lucrative.

"I want to seize this opportunity to tell the youth of Obuasi that farming is a very profitable venture. There are opportunities in farming which I believe the youth should take advantage of," he stated.

He however appealed to the government to make fertilizer accessible saying the high cost of it makes it difficult for farmers to get them to improve their yield.

DON'T GIVE YOUR FARMLANDS OUT FOR MINING

Honorable Faustina Amissah, the District Chief Executive for Obuasi East in an interview with the media after the event appealed to farmers in the district not to give their farmlands out for illegal mining activities.

She said the practice which has become common among Ghanaian farmers now, could have a dire consequences on Ghanaians since arable lands could be depleted resulting in food insecurity.

Hon Amissah underscored the importance of this year's farmers' day celebration emphasising that farmers have held their own even under challenging economic situations in the country.

In line with this, she added that the Assembly deliberately decided to improve the prizes for the award winners to encourage them to continue to work hard.

"This year, we decided to award 10 farmers from different backgrounds while we improved the prizes for deserving winners. We are doing this to send a signal to farmers that we appreciate their contributions to the development of the country," she stressed.

The Member of Parliament for the Obuasi East constituency Dr. Patrick Boakye Yiadom who was the special guest of honour for the event also lauded farmers in the district for their contributions to the economic development of Ghana.

He said government recognising the importance of agriculture has rolled up plethora of programs which is targeted at transforming the economy of the country. He said programs like planting for food and jobs remain a key program of the government to transform the agric sector.

Hon Boakye Yiadom also donated gas cylinders to all the awardees on the day.

The theme for this year's farmers' day is "Accelerating Agriculture Development Through Value Addition." This according to the District Director of Agric Osei Yaw is a reminder for government and stakeholders involved in the Agriculture value chain, of the essence of Agro-processing.

He said agro-processing has tremendous potential for increasing income through value addition, shelf life and access to food security through the establishment of scaled agro-processing businesses and rural agro-based industries.