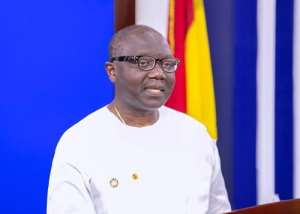 Finance Minister, Ken Ofori-Atta, has announced that existing domestic bonds will be exchanged for a set of four new bonds.

Bonds as of December 1, 2022, that are due for payment will not be paid until at least five years from now.

The interest on these bonds differs as bonds in 2024 will attract an annual coupon of 5%, and that of 2025 will provide 10% interest until maturity.

“Coupon payments will be semi-annual,” the Finance Minister revealed.

Bonds in 2023 will however attract no interest.
According to Mr Ofori-Atta, the adjustment made is as a result of a debt operation programme Ghana would be taking as part of its arrangement with the International Monetary Fund (IMF).

“The broad contours of the Debt Sustainability Analysis has been concluded and I am here this evening to provide some details on Ghana’s Domestic Exchange which will be launched tomorrow,” he said.

He assured that government worked hard to minimize the impact of the domestic debt exchange on investors holding government bonds.

Following government’s intervention, he announced that Treasury Bills would be exempted in the country’s domestic debt exchange and will be paid the full value of their investments on maturity.

“There will be no haircut on the principal of bonds” and “Individual holders of bonds will not be affected,” the Minister added.

On October 30, President Akufo-Addo while addressing Ghanaians on the state of the economy pledged that there would be no haircut on investment.

Mr Ofori-Atta explained that haircut has been taken off the table since “government recognises that our financial institutions hold a substantial proportion of these bonds.”

Meanwhile, the Bank of Ghana, Securities & Exchange Commission, National Insurance Commission and the National Pensions Regulatory Commission will ensure that the impact of the debt operation on the financial institution is minimised.

On the other hand, government is establishing a Financial Stability Fund (FSF) to help provide liquidity support to banks, pension funds, and insurance companies, among others to ensure they are able to meet their obligations to their clients.

“First time since 1982. In certain like-for-like respects though it is the first since the 1972 commercial loan default,” he tweeted.

He, however, questioned whether the way forward for Ghana with regard to addressing its debt would be a smooth or rough ride.