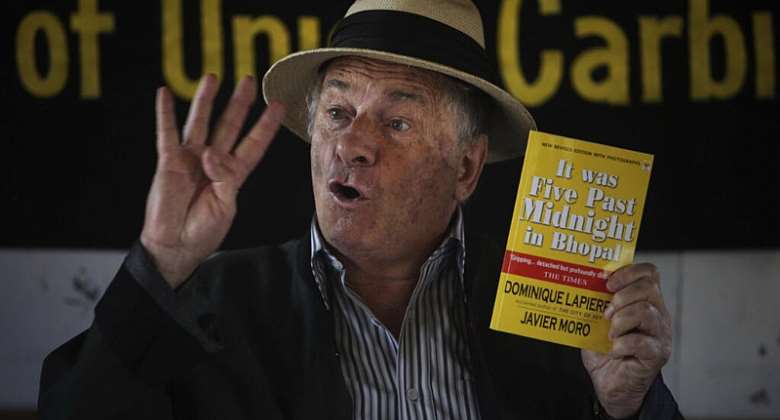 French writer Dominique Lapierre, the author of best-selling books on India like "Freedom at Midnight" and "City of Joy" and whose novels sold tens of millions of copies, has died at the age of 91.

Born on July 30, 1931, in Chatelaillon, Lapierre has sold about 50 million copies of the six books he wrote in collaboration with the American writer Larry Collins -- the most famous being "Is Paris Burning?"

The non-fiction book published in 1965 chronicled the events leading up to August 1944, when Nazi Germany surrendered control of the French capital, and was adapted for the silver screen by Francis Ford Coppola and Gore Vidal.

His 1985 novel "City of Joy" -- about the hardships of a rickshaw puller in Kolkata -- was also a massive success. A movie based on it was released in 1992, starring Patrick Swayze and directed by Roland Joffe.

Lapierre donated the bulk of his royalties from "City of Joy" to support humanitarian projects in India.

When he visited Mother Teresa in Kolkata in the early 1980s, he presented her with $50,000, admitting it was "only a drop in the ocean of need".

The Albanian nun reportedly replied: "If this drop did not exist, even the ocean would not".

In 2005, Lapierre said that thanks to his funding of humanitarian work, as well as donations from readers, it became "possible to cure a million tuberculosis patients in 24 years (and) to care for 9,000 children with leprosy".

"It's not enough to just be a best-selling author," said the adventure-loving novelist, who spoke fluent Bengali.

"You need to fight against the injustices you write about in your books."

An idol in India

Born to a diplomat father and a journalist mother, Lapierre worked as a reporter for French magazine Paris-Match in the 1950s -- a job that sent him around the world.

In West Bengal, he was "revered as an idol" -- according to a 2012 article by Paris Match magazine -- when he banged the drum for funding for humanitarian centres as donations dried up following the economic crisis in the United States and Europe.

After "Is Paris Burning?", he continued his fruitful partnership with Collins.

The duo specialised in highly researched dramatisations of historical events, such as the creation of Israel ("O Jerusalem", 1972) and the Indian independence movement in "Freedom at Midnight" (1975) -- largely considered a moving and seminal account of the partition of India.

Their success was credited to how they complemented each other -- Lapierre had contacts in the French intelligence services while Collins with the CIA. Both authors also wrote in their respective languages, and translated each other's work.

And if Lapierre's prose tended to the lyrical, Collins insisted on a firm grounding in facts.

They also co-wrote "Or I'll Dress You in Mourning", a biography of the Spanish bullfighter El Cordobes, and two fiction thrillers about terrorist plans to destroy New York -- "The Fifth Horseman" in 1980 and "Is New York Burning?" in 2004.

The first had Libyan leader Moamer Kadhafi as the villain, and the second was inspired by the September 11, 2001 attacks by Islamic militants.

For a long time, Lapierre lived near Collins in Saint-Tropez, their residences separated by a tennis court.