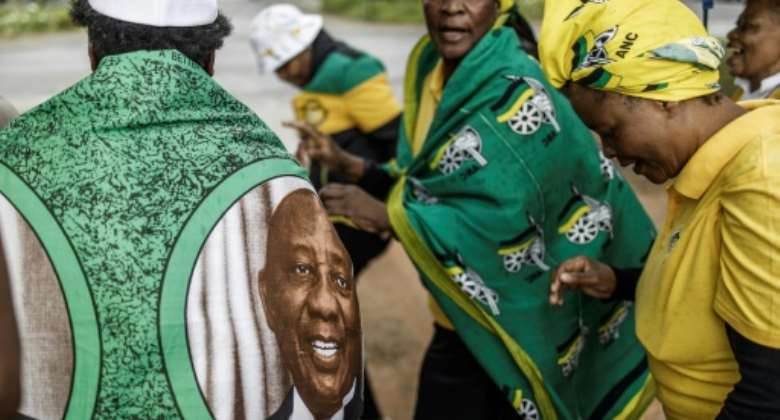 The top leaders of South Africa's ruling party went into talks on Monday to discuss the fate of embattled President Cyril Ramaphosa on the eve of a parliamentary vote that could lead to his impeachment.

Ramaphosa insisted at the weekend that he would not resign after a parliament-appointed panel last week reported on an alleged coverup of a cash robbery at his farm, but his political future remains uncertain.

On Monday morning the president arrived at the venue where the African National Congress' highest body -- the National Executive Committee (NEC) -- was meeting to discuss the crisis.

Forged by Nelson Mandela into the weapon that led the fight against apartheid, the ANC has been deeply divided by the affair, but after a pendulum swing a majority now seems be backing the president.

"Today we are observing the nine years' anniversary since the passing on of Madiba," ANC spokesman Pule Mabe told reporters, referring to Mandela's death in 2013.

"In remembering him we are going to make sure that the (NEC meeting) concludes being united."

A small group of demonstrators, some supporting the president, others calling for him to go, gathered outside the meeting in the Johannesburg story of Nasrec.

"The right thing is to tell Cyril Rampahosa that he must step down," said ANC member Carl Niehaus, 63, a former spokesman to Mandela and critic of his successor.

He wore an ANC T-shirt and holding a framed sign reading "Ramaphosa must go".

But Ramaphosa supporter and ANC member Maropeng Serakwana, 40, warned against any early leap to judgement against the president.

He "must be treated fairly like any other citizen in this country," he said.

The bombshell report will be debated parliament on Tuesday, a step that could lead to a vote on Ramaphosa's removal from office.

For this to happen, two-thirds of the assembly must vote in favour of the removal motion. The ANC has 230 out of 400 seats.

The scandal has become known as the Phala Phala affair, named after Ramaphosa's farm in the northeast of the country.

It began in June, when South Africa's former spy boss filed a complaint with the police alleging that Ramaphosa had concealed the theft of a huge haul of cash from the farm.

He accused the president of having organised for the robbers to be kidnapped and bribed into silence.

Ramaphosa, in submissions to the three-person investigative panel appointed by parliament, denied any wrongdoing.

He said the cash -- more than half a million dollars, stashed beneath sofa cushions -- was payment for buffaloes bought by a Sudanese businessman.

But his explanations did not convince the panel, which raised questions about the source of the cash and said he "may have committed" serious violations and misconduct.

A police inquiry is ongoing, but he has not so far been charged with any crime.

The scandal comes at the worst possible time for Ramaphosa.

The 'Phala Phala affair' has damaged Ramaphosa's reputation for clean hands. He was long-time vice president to Jacob Zuma, who was forced out in 2018 as corruption scandals mounted. By Daniel LEAL (AFP/File)

On December 16, he will contest elections for the ANC presidency -- a position that also holds the key to staying on as the nation's president.

A former mine union president who made a fortune in business in post-apartheid era, Ramaphosa came to office in 2018 riding on a graft-free image after the corruption-tainted presidency of Jacob Zuma.

His spokesman, Vincent Magwenya, on Saturday said the parliamentary report was "flawed".

Ramaphosa would not resign on this basis and would contest the document in court, he said.

"Ultimately the decision on impeachment would be a political one in parliament," said a judicial source who requested anonymity.

The ANC's overwhelming majority in the Nationial Assembly means that it is not even certain that parliament will vote to launch the procedure of impeachment, as removal from office is called in South Africa.

As well as Ramaphosa, some legal experts have outlined flaws in the report.

They argue that without recourse to the ongoing criminal investigation it is based largely on hearsay, Ramaphosa's statements, and the initial complaint lodged by an opponent of the president.