'Don't use farming to punish the kids' — Amansie South DCE 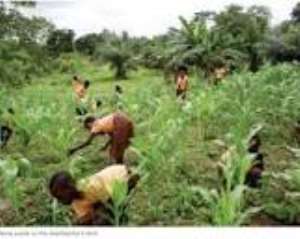 The District Chief Executive (DCE) of Amansie South in the Ashanti Region, Mr. Clement Opoku Gyamfi has described weeding as a form of punishment for wrongdoers in the society.

According to him, such behavior discourages the youth from going into farming despite the government's efforts to support farmers in Ghana.

"It's disheartening that when children flaunt the laws in school, their punishment is to give a portion of land to weed on. Again, when a court sentences one to prison in hard labour, the convict is taken to the roadside to weed as punishment.

"But if we want to draw more people into agriculture, all these forms of punishment should come to an end," the DCE pointed out when he addressed the locals at the Farmers' Day celebration held at Datano in the district.

Hon. Clement Opoku Gyamfi also as farmers asked farmers in the country to change their view on Agriculture and start seeing it as a full-time business that could earn them good money.

“Do not look down upon yourself…farming is not a punishment, neither is it for illiterates. It’s a full-time profession for educated and uneducated interested persons”, he admonished.

He added, "seek the knowledge of Extension Officers and Veterinary Officers in your areas and they will make farming profitable to you."

The Amansie South DCE also admonished the youth in the areas to take advantage of the government's YouthStart program aims at equipping young farmers.

Election violence in Nigeria's south east is threatening to ...
31 minutes ago