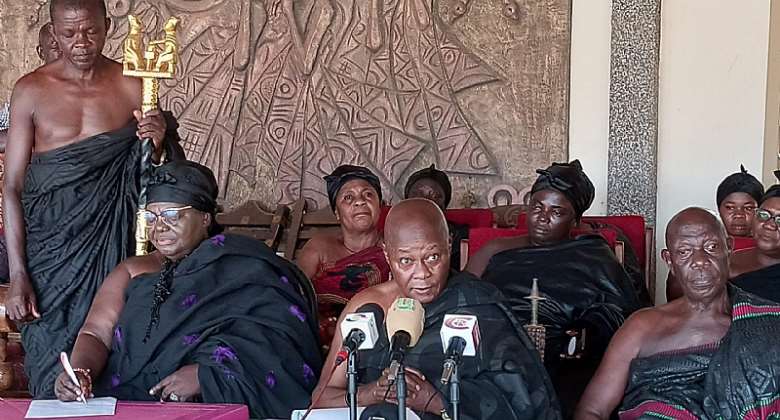 The Sunyani Traditional Council and the youth of the traditional area have a sacred duty and responsibility to their forefathers, present generation, and those yet unborn to protect Sunyani stool lands bequeathed to them.

According to the Traditional Council at a press conference addressed by Nana Kwaku Sarbeng II, the Akwamuhene of Sunyani, the Council knew the boundaries of Sunyani Stool lands, saying, the fact that part of Sunyani Lands through politically administrative creation had become part of Sunyani West Municipality with Fiapre located within that jurisdiction, “does not give Obrempong Professor Kyem-Amponsah II, the Chief of Fiapre the power to make claims to a land belonging to the Sunyani Stool.”

Nana Sarbeng II made the claim when he was reacting to an incident that occurred in the municipality some days ago, where some young men of Sunyani pulled down a billboard on Sunyani land, erected by some people of Fiapre to promote a festival to be celebrated by the Chiefs and people of Fiapre.

He stated, “he Council has learnt with grave concern, an attempt by Obrempong Prof. Kyem-Amponsah II to twist history by making claims of owning parts of Sunyani Lands with a consequent action to install some chiefs on Sunyani Land.”

Nana Sarbeng II said based on the history and archival records available, “Sunyani Stool did not share boundaries with Fiapre Stool anywhere and, therefore, the conduct of Obrempong Prof. Kyem-Amponsah II to unilaterally set and determine the boundary between the two stools is provocative.”

He stressed, “the situation is getting murky and can spark disaster” to disturb the prevailing peaceful co-existence and social cohesion.

The Council is therefore appealing to the Regional Security Council to facilitate for the chiefs and people of Fiapre to restrict the celebration of their upcoming festival on Fiapre stool lands by not treading on any portion of Sunyani land for peace to prevail.

On her part, Nana Akosua Duaa Asor Sika Brayie II, the Paramount Queen-mother of the Sunyani Traditional Area urged the media to be circumspect in their reportage on issues regarding chieftaincy, particularly land disputes, saying, ”most of you may not know our history, hence do not offer your platforms for people to spread what is factually incorrect.”