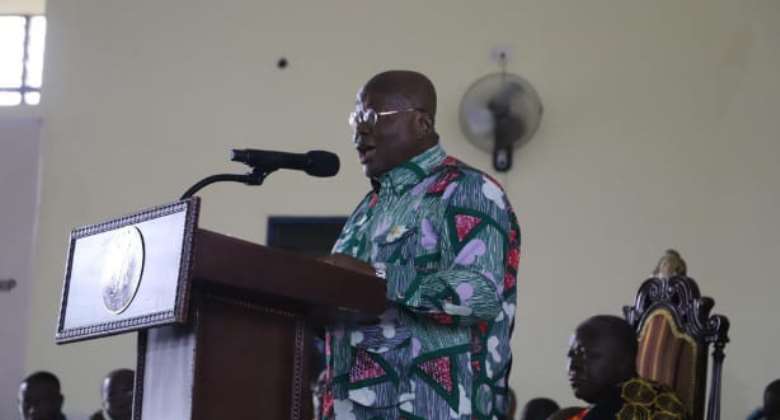 President Nana Akufo-Addo has admitted that there have been challenges associated with the implementation of the Free SHS policy.

In spite of the challenges, the President assured that the government is addressing many of them and more in the course of time.

President Nana Akufo-Addo said this in his speech during the 70th anniversary celebration of Opoku Oware School (OWASS) in Kumasi on Saturday, December 3, 2022.

The theme for the anniversary was "Seven Decades of Leadership Through Self-Discipline" chaired by Justice Steven Alan Brobbey, an old student of OWASS and a former Supreme Court Judge.

The Asantehene, Otumfuo Osei Tutu II was the Guest of Honour also graced by the Metropolitan Archbishop of the Catholic Archdiocese of Kumasi, His Grace Most Rev Gabriel Anokye.

The program also attracted old students (Akatakyie) from all over the globe, former headmasters and staff, politicians, government appointees, MPs and the public.

President Nana Akufo-Addo stated that in spite of the challenges, he was very proud of the policy and the positive outcomes thus far.

"Six years on following the implementation of the Free SHS Policy, it has guaranteed a minimum of 1.3 million Ghanaian children, the highest such enrollment in our history.

"Yes, there have been challenges associated with the policy which the government is addressing substantially many of them and there will be more in the course of time, such is the nature of social evolution ti the stage the challenges will be met," he admitted.

In addressing the situation, the President assured that "in spite of the economic difficulties confronting the nation, government is devoted even more resources to the running of the SHS Policy.

The chairperson for the program, Justice Steven Alan Brobbey, an old student and former Supreme Court Judge, urged the students to be self-disciplined.

He noted that discipline will help them achieve academic excellence and play important roles in the development of the nation.

The Headmaster of Opoku Oware School, Rev Fr Stephen Owusu Sekyere, in his remarks commended the old students (Akatakyie) for sacrificing their resources to support the school.

He also expressed his gratitude to President Nana Akufo-Addo for resourcing the school with classroom blocks.

He, however, appealed to the President to help complete a 21-unit classroom block and build a wall around the school to ward off encroachment.