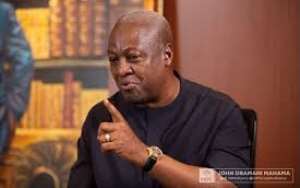 Former President John Dramani Mahama has taken a swipe at some NPP MPs and cabinet ministers for deciding to abandon the 2023 budget debate and flew to watch the ongoing FIFA World Cup in Qatar.

While the Minority Caucus were debating the 2023 budget and economic policy plan, most of the MPs from the Majority side were missing in Parliament.

Some MPs were in Qatar to "cheer" the Black Stars despite the huge numbers of various supporter groups flown there by government.

In his speech at the 13th Congregation of the Accra Business School on Saturday, December 3, the 2020 NDC presidential candidate described the action of the MPs as "great carelessness" in the discharge of their representative and leadership duties for the country.

“This represents an unprecedented dereliction of duty and responsibility, and I think the President must be putting his foot down on this,” the former President stated.

He added, “In the wake of all these disturbing happenings, government MPs and cabinet ministers seem to have no interest in appearing as the people’s representatives to debate the government’s own budget for 2023.

“Many have rather chosen and have been permitted to go on vacation to go and cheer the Black Stars.”

The behaviour, according to Mr. Mahama, is an indication that the government and its officials have no interest in finding solutions to challenges facing the suffering Ghanaians.

“Only a handful of MPs on the minority side have shown up in Parliament this week to participate in the budget debate and defend the policy choices therein.

“I dare say never has a government shown disinterest in working on its own budget at a time of great economic crisis and suffering, during which utmost seriousness and urgency are required to address the problems that we face,” he emphasised.