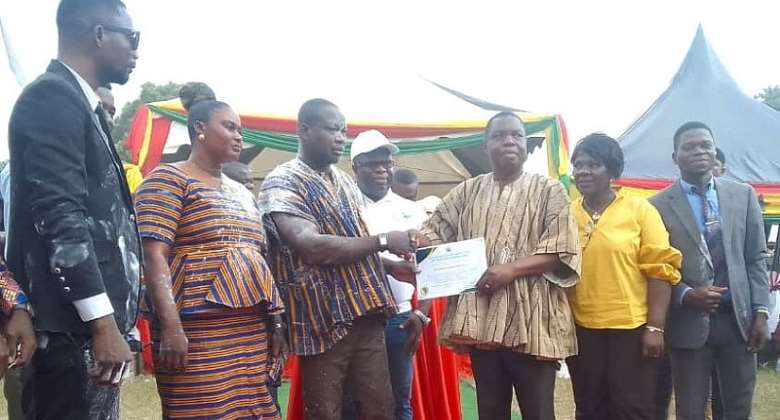 The Bono East Regional Co-ordinating Council (RCC), together with all the Municipal and District Assemblies in the region are leaving no stone unturned to make the region the hub of rice production in the country.

The region has the potential to be the most preferred destination for agro-processing companies and businesses if particular attention is paid to commercial agriculture through block farming and value addition.

With the needed investment, the region, which has some 44,000 hectares of low valley land, is in the position to produce 400,000 tons of paddy rice during the major season annually.

This would mean that the Bono East region could play a lead role in drastically reducing the country’s annual importation of rice by nearly 50% while boosting the local economy through value addition and job creation.

In this regard, the Bono Regional Minister, Kwasi Adu Gyan, is calling on investors interested in investing in the region to count on the government and the RCC for all the needed assistance to enable them to succeed.

The Minister believes that the agrarian nature of the region offers unlimited investment and employment opportunities for numerous actors such as producers, aggregators, processors, distributors and exporters along the various agricultural value chains such as maize, rice, soya, yam, cassava, watermelon, tomatoes, mangoes and cashew, among several others.

Addressing the region’s version of the 38th National Farmers’ Day at Atebubu over the weekend, Mr. Adu Gyan touted the region as “the near-perfect bundle of agricultural produce has and continues to provide the food and the raw materials needs for the region and the nation at large.”

He added, “The vast arable lands and reliable water resources spread across the region coupled with the highly capable human resources make the region a production hub of key staples and vegetables that have implication for food security; and fruits and nuts that serve as raw materials for agro-industries, as well as fishes and livestock production particularly, production of ruminants in the region, is unmatched.”

He mentioned soya beans, maize, cassava, ground-nuts, mango, cashew and coconut as some other crops that can be produced in commercial quantities in the region when given the needed push by way of investment.

Quoting a recent media report, the minister said “only 0.5% of 18 million metric tons of cassava is processed in Ghana.”

He stated that President Akufo Addo’s vision is to diversify the structure of the Ghanaian economy, by transforming it from the age-old practice of production and export of raw materials to value addition through processing and manufacturing.

“This vision holds a lot of promise for the Bono East Region. Under the leadership of President Nana Akufo-Addo, three value-added factories have been established in the Bono East Region to add value to the produce of our hardworking farmers”, he stated.

Touching on the invasion of some Fulani herdmen and their cattle on some farmlands in the area, the Regional Minister gave the assurance that Regional Security Council will soon map out a strategy to deal with the situation and called for the maximum support and cooperation of traditional authorities in that regard.

He condemned the wanton destruction of farmlands by these nomadic herdsmen and emphasised his resolve to deal with the matter.

At the end of the programme, Mr. Belidon Yaw Ningantor of Atebubu was crowned the 2022 Bono East Regional Best Farmer.

He took home a tricycle, one mist blower, four bags of NPK, five knapsack sprayers, five boxes of aduanepa fertilizer, a box of begreen liquid fertilizer and a certificate.

Eleven others were honoured by the Atebubu-Amantin Municipal Assembly, with 43-year-old Paul Akwasi Tawiah of Jato Zongo emerging as the over-all Municipal Best Farmer.

Among the large crowd to witness the colourful programme were senior management members of the India-Africa Trade Council led by Gudipati Vamshi Krishna, the Trade Commissioner and top business executives of the Kingdom Exim Ghana Limited, a leading West African-based exporter and supplier of agro-products.

The Kingdom Exim Ghana Limited supported the Regional Farmers Day programme with a cheque for Gh.c 20,000.00.

The Kingdom Exim Group of Companies in partnership with the Bono East Regional Co-ordinating Council later held a Strategic Business Conference at the plush AJ Hotel in Techiman under the theme “Tapping into the investment opportunities in Bono East Region” to solicit more support towards the transformation of the region’s vast agricultural resources for the mutual benefit of investors and the people of the area.