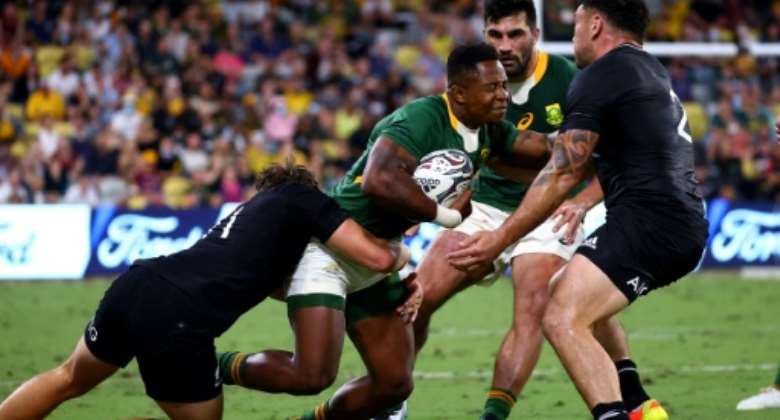 Sbu Nkosi made his South Africa debut in 2018. By Patrick HAMILTON (AFP/File)

Springboks winger Sbu Nkosi has been missing for three weeks, his South African club side Bulls said on Saturday, with police admitting "concerns about the player's safety".

Nkosi, 26, a Rugby World Cup winner three years ago, made the last of his 16 Test appearances in October 2021 but missed out on this year's Autumn Nations Series with a rib injury.

The Bulls said Nkosi has not been heard from since November 11.

"After numerous failed attempts, which include but are not limited to phone calls, texts messages, calls to relatives, partner and close friends as well as four house visits to his known place of residence, the company took the decision to open a missing person case with police on Thursday 17 November 2022," the Bulls said in a statement.

"This resulted from the grave worry and concern of everyone at Loftus as well as the need for the expert assistance of the South African Police Services.

"We appreciate both the public and media interest in the matter, as we all share the same concerns about the player's safety," they added.

Election violence in Nigeria's south east is threatening to ...
21 minutes ago