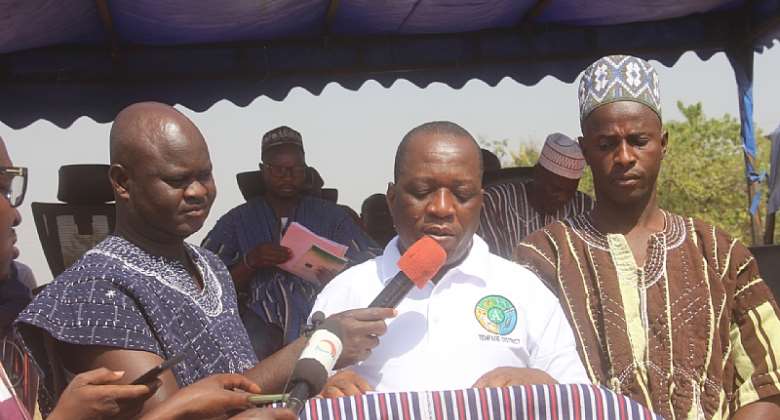 The district chief executive, Hon. Anabida Issaka through the District gric directorate at the district level joined the entire country in compliance with the national calendar to celebrate and honour hard-working farmers.

The district executive for Tempane, Anabida Issaka in his speech encouraged all especially the youth to get involved in commercial farming since government has already set policies to support them.

He further reiterated that one cannot overlook the success chalked as a result of some of the government flagship programmes in the agriculture sector which has helped to sustain the economy before and during the onset of COVID-19.

Under the planting for food and jobs program, he noted that a number of farm inputs such as improved seedlings and subsidised fertiliser were procured and offered to farmers.

He added that the Tempane irrigation dam, phase 1 and 2 has been completed while the third face is awarded to a constructor to develop 1000 hectors of irritable lands and canals to improve dry season farming.

The DCE however, warned residents who are involved in cattle thief in the district and felling of trees and burning of charcoal in the area should desist from doing so.

The district again used the opportunity to congratulate all the 37 award winners in the district.

In all 37 farmers were awarded certificates and other agricultural inputs. The best physically challenged farmer went to Kombat Jonathan. He went home with Wellington boots, 1 cutlass, a knapsack sprayer

Best female farmer went to Madam Haruna Mamata from Zansiribulga community. She went home with a Motorbike, a pair of Wellington boots and other farming inputs.

The overall best farmer went to Akpenib Atiig, from Nintabugsug community. He went home with a motor king, Wellington boots, knapsack sprayers and other farming inputs.

In attendance for this year’s celebration were the DCE, Chiefs and people of the Tempane traditional area, farmers, the presiding member, all assembly members, all staff of the district assembly, residents of Tempane district, the media, reps of the state security agencies, reps of the various government and non-governmental institutions in the district.