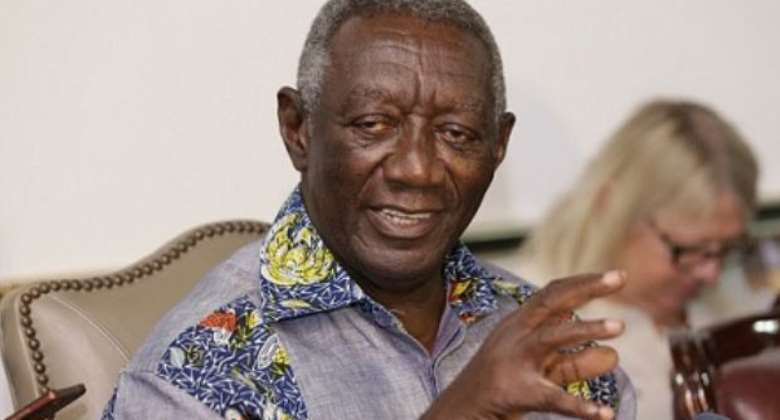 I have read several varied captions of the same news story, in which former President John “Kofi Diawuo” Agyekum-Kufuor is reported to be claiming that it was an official invitation to visit the Muslim Democratic Republic of Malaysia, Southeast Asia, in 2005, or thereabouts, that fully convinced the 84-year-old two-term democratically elected Ghanaian leader that the current 4-year presidential tenure was woefully inadequate for any progressive leader and government to make any worthwhile or significant gains on the national economic development front (See “What Kufuor Saw in Malaysia in 2005 that Changed His Mindset[sic] about Ghana's Presidency” Ghanaweb.com 12/2/22).

The news story goes on to say that upon his historic arrival in Kuala Lumpur, the Malaysian capital, the former Deputy Parliamentary Minority Leader in Ghana's Third Republic was literally fed a sumptuous aerial “feast” of the hundreds of thousands of hectares of well-cultivated oil-palm plantations, developed by the government of then-Malaysian Prime Minister Dr. Mahathir Mohamed. The extant Ghanaian President would also be conducted around the comprehensive panoply of oil-palm-related industrial plants and factories that had been established all over the host country by the aforementioned government.

We are further informed that in 2005, at the time of his visit and during Mr. Agyekum-Kufuor's second term in office, Dr. Mahathir Mohamed had been in office for a relatively protracted span of 10 years. But, of course, the real patently pedestrian story here is the nauseatingly known and tired fact that sometime during the 1960s, or thereabouts, the Malaysian State or Government had imported some oil-palm seedlings from Ghana to develop its presently globally renowned and celebrated oil-palm industry. Now, this is absolutely no “teachable” narrative for Ghanaians to worry ourselves silly over and/or about. You see, the same yarn or narrative could be unfurled about the equally globally renowned and celebrated Tetteh Quarshie (Tetteh Kwasi) Story, which also entails the importation of several cocoa pods from the Island of Fernando Po, in present-day Equatorial Guinea, into the erstwhile British-ruled Gold Coast Colony in the 1880s by the legendary goldsmith.

At any rate, within the temporal space of just one generation, or approximately 30 years, that is, from 1880 to 1910, as memorably and eloquently recounted by Dr. J. B. Danquah, the globally distinguished scholar and putative Doyen of Gold Coast and Modern Ghanaian Politics, Ghana had become the world's foremost producer and exporter of raw cocoa beans. But that is about where any striking similarities between the oil-palm plantation success story of Malaysia and the cocoa production and exportation story of Ghana end or diverge. The fact of the matter is that unlike their politically lethargic and morbidly complacent Ghanaian counterparts, the Malaysian leaders had a visionary and a missionary agenda for what they intended to do with the oil-palm seedlings which they had imported from Ghana. Their fellow British-colonized and occupied former Crown Subjects and Veritable Slaves, to be certain. The visionary Malaysian leaders had wisely and constructively mapped out a comprehensive national economic development plan and agenda around their oil-palm plantation agriculture.

On the other hand, Ghanaian leaders in the postcolonial era have continued to unwisely and recklessly follow the primitive and extractive European Colonial Raw-Material Supply Agenda and Regime imperialistically and self-servingly established by England and her Western-European kinsfolk and allies. Put into simple English, contrary to what Mr. John “Gentle Giant” Agyekum-Kufuor would have the rest of us, members of the global Ghanaian community, believe, the woeful lack of a healthy socioeconomic development agenda and success story of our beloved nation has very little to absolutely nothing to do with the temporal span or how long an elected Fourth Republican Ghanaian President is constitutionally mandated to stay in office. Rather, it has everything to do with leadership preparedness, competence, genius and vision; and then, add to the preceding political ingredients, the culture and the mental frame or temperament and the mindset of the people.

On the latter count must also be significantly pointed out that the general level of corruption and the sort of self-destructive tendencies that have resulted in the massive pollution of Ghana's hitherto pristine waterbodies, forestry resources and the environment at large does not exist in Malaysia and definitely did not exist in the Malaysia that was governed by Dr. Mahathir Mohamed. This is diametrically opposite of the sort of infamously cynical response that as President, Mr. John Agyekum-Kufuor offered his most ardent critics, both within the ranks of his own government and political party, on the one hand, and the organized political opposition and the general opposition forces at large. And that patently cynical and downright repulsive and irredeemably scandalous response was that “Corruption has been with us, humans, since the time of Adam and Eve.”

In Malaysia, Prime Minister Mahathir Mohamed was globally known as a ham-fisted disciplinarian who did not suffer the sort and level of nation-wrecking acts of heinous criminality that became the unique hallmark of the Agyekum-Kufuor government. We also need to quickly point out that by any fair and objective measure, the first 4-year tenure of the two-tenure elected President Addo Dankwa Akufo-Addo witnessed far more significant national development achievements than at any other moments in Ghana's 32-year-old Fourth-Republican Dispensation, from the prompt and salutary resuscitation of the John Dramani Mahama-collapsed Agyekum-Kufuor-established National Health Insurance Scheme (NHIS), the landmark and historically unprecedented implementation of the Fee-Free Senior High School System, and the auspicious and definitive resolution of the age-old Yendi/Dagbon Chieftaincy Feud/Crisis.

In short, Ghana's development problems are the direct result of a huge and near-irreparable deficit on the leadership front. The inescapable and undeniable fact of the matter is that we are a nation that is pathologically and almost intractably saddled with a thoroughgoing hive of corrupt and morally degenerate leaders and unconscionable kleptocrats and impenitent robber-barons. It is as simple as that.