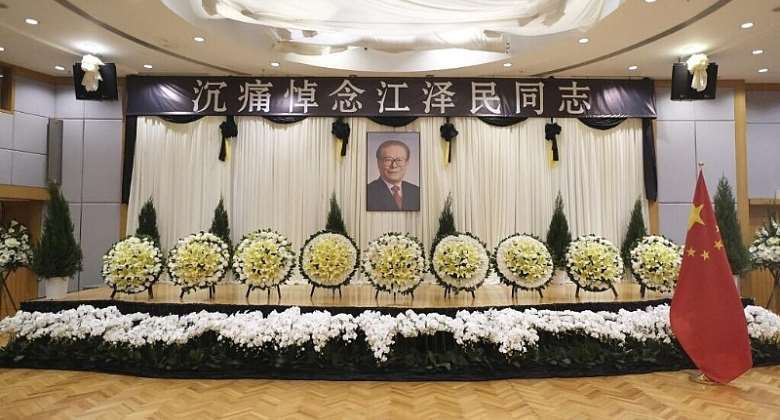 Mobile apps and state media websites turned black and white, flags on some government buildings in Beijing were at half-mast and flowers were laid late last week as China mourned the death of former leader Jiang Zemin.

State media said Jiang had died of leukaemia and multiple organ failure in Shanghai on Wednesday at the age of 96, and that funeral preparations had begun.

Floral tributes were laid in Jiang's hometown of Yangzhou and nearby Shanghai, where police were deployed in force on Thursday morning around the intersections near the hospital where he was rumoured to have died, AFP reporters saw.

They saw a convoy of vehicles coming from the direction of the hospital at around 12:45 pm local time, led by a car bearing what appeared to be a wreath of yellow flowers on its bonnet.

Pictures sent to AFP by someone living along one of the major roads nearby showed people lining the pavement holding white chrysanthemums, a traditional Chinese funeral flower. Some held a banner saying "May you have safe travels, old classmate".

No date was given for the event but it is expected that it will be held in Beijing.

Jiang's legacy is mixed. Many welcomed his humorous public persona as a breath of fresh air after decades of staid communist leadership, while critics accused him of allowing rampant corruption, inequality and the repression of political activists.

Jiang was propelled to power after he proved able to diffuse tension between students and government in Shanghai during the pro-democracy movement in 1989. At the time, Jiang was Shanghai's Communist Party Secretary.

Unlike authorities in Beijing, which called in the troops to quell the demonstrations, Jiang managed to calm the crowds without using violence.

As a result, then China's strongman Deng Xiaoping gave him the position of party leader, replacing Zhao Ziyang who had been demoted and accused of "splitting the party" after supporting the students on Tiananmen Square.

Jiang built his reputation on Deng Xiaoping's Open Door Policy, which started in 1979 after the chaotic decades under Mao Zedong with his Great Leap Forward and Cultural Revolution, which cost millions of people their lives.

During Jiang's rule, China saw its biggest economic growth ever, became member of the World Trade Organization and positioned itself as a global player, overtaking Russia, which was crumbling in the wake of the demise of the Soviet Union.

Jiang also tried to put his own mark on the Communist Party's policy by introducing his "Three Represents", an opaque but vastly underestimated plan that would allow "intellectuals" into the "working class" while not excluding capitalists and private entrepreneurs – a move seen by some critics as an attack on the very foundations of communism.

But the terms used by Jiang were vague and often misunderstood, generating popular ridicule.

In spite of his friendly face and funny performances (he was filmed singing songs and playing the ukelele), Jiang took a hard line against the Falun Gong spiritual movement, which he branded a "deviant teaching" or a cult.

Were human organs stolen in 20-year conflict between Beijing and Falun Gong?

In 1999, thousands of Falun Gong members surrounded Beijing's government center Zhongnanhai in a peaceful protest, seeking official recognition as a religion for their group and its teachings.

Jiang cracked down hard, putting thousands in prison where, according to human rights organisations including Amnesty and Human Rights Watch, they were tortured during long sentences.

In 2002, Jiang stepped down from the position of party secretary and the ultimate power was transferred to Hu Jintao.

In retirement, Jiang became the subject of light-hearted memes among young Chinese fans, who called themselves "toad worshippers" in thrall to his frog-like countenance and quirky mannerisms.

More than half a million commenters flooded state broadcaster CCTV's post on the social media platform Weibo within an hour of his death being announced, many referring to him as "Grandpa Jiang".

Is the Communist party's old guard tiring of Xi's iron grip on China?

Pictures on social media on Thursday showed the walls of Jiang's old residence in Yangzhou lined with bouquets of flowers, with some people bowing as they placed them there.

CCTV said Wednesday that flags would be flown at half-mast at some government buildings until the funeral.

The websites of state media and government-owned businesses turned black-and-white, as did apps such as Alipay, Taobao and even McDonald's China.