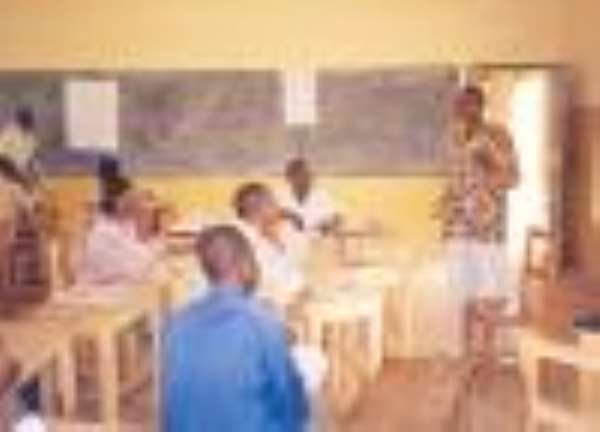 Some candidates seeking placement into senior secondary schools (SSS) are still having problems with the Computerised Schools Selection and Placement System (CSSPS).

A number of the candidates and their parents who had gathered in an uncompleted building in front of the CSSPS Secretariat near the Morning Star School in Accra said they were very frustrated.

During a visit to the secretariat on Tuesday, some of the parents said they had been standing since 6.00 a.m. because there were no seats for them. Other parents and their children sat on the floor of the uncompleted building.

They declined to disclose their names because they said it could compound their problem. However, they were ready to share their predicament with this reporter.

According to them, the problems had nothing to do with bad aggregates but with non-placement by the computer, as well as placement which was not favourable to them.

A parent who had travelled from Asamankese in the Eastern Region said her daughter had been placed in a boarding school which she had not chosen, saying she preferred a day school because she could not afford the boarding fees.

She said the headmaster of Asamankese Secondary School had agreed to admit her daughter and had given her a letter for a change of placement which she had brought to Accra but the security man at the gate would not allow her entry.

She said the headmaster had indicated that there was room for more students. Another parent from Takoradi said she was very sad about the situation and could not sleep.

Others said the computer did not place their children at all and that was why they had come to seek placement.

The security man at the gate said there was a directive from the sector minister and the Director-General of the Ghana Education Service (GES) that the candidates and their parents should not be allowed to enter because they often caused trouble when they did.

He said the visitors had to wait at the gate until the one in charge, whose name he gave as Mr Oppong, arrived at 12.30 p.m.

The Co-ordinator of the CSSPS, Mr Andrew Akuoko, was said to be at a meeting and was, therefore, not available for comment on the situation.

The Junior Graphic, in its November 1-7 issue, reported that the Deputy Director-General of the GES, Mr S. Bannerman-Mensah, had asked all Basic Education Certificate Examination (BECE) candidates who filled fresh forms for the second placement into senior secondary schools and technical institutions to contact their former schools to find out where they had been placed.

The report said the second placement had been completed and the lists sent to the district directorates of education for submission to heads of junior secondary schools and that there would not be a third phase.

After the second phase, any school which had vacancies would be filled by a manual placement exercise.

Mr Bannerman-Mensah indicated in the report that the filling of new forms for phase two of the SSS placement did not provide an automatic placement because it remained competitive and a candidate with a higher raw score stood a better chance of gaining admission than his/her colleague with lower raw scores.