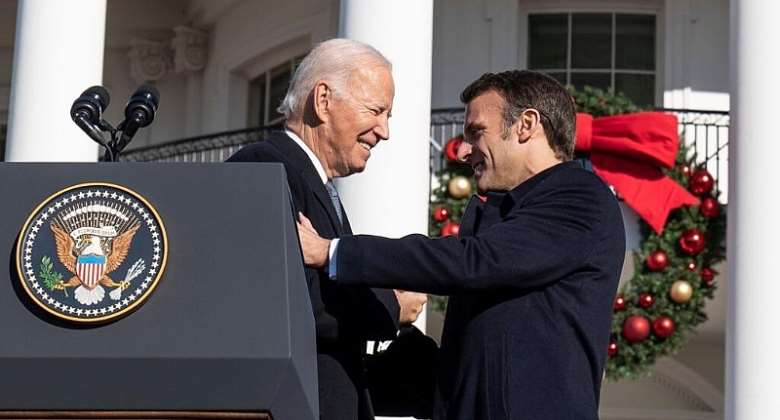 President Joe Biden greeted President Emmanuel Macron at the White House on Thursday with full military honors and a pledge to maintain "unwavering" US-French friendship ahead of talks on Ukraine, China and a looming trade dispute.

Service members from the marines, army, air force,  and even a detachment of soldiers in 18th century Revolutionary War garb paraded in front of the White House.

Standing on a red-carpeted podium with Macron, Biden said: "France is our oldest ally, our unwavering partner in freedom's cause."

Like Biden, Macron noted that the two countries had stood side by side through many wars. Referring to the Western alliance helping Ukraine in th face of the Russian invasion, Macron said "we need to become brothers in arms once more."

The two presidents then met in the Oval Office for discussions on Ukraine, managing the rise of China and European fears that Biden's economic policies will lead to a trade war.

Submarine deal
The visit underlines to extent to which Washington and Paris have buried last year's bitter spat over the way Australia pulled out of a French submarine deal in favor of acquiring US nuclear subs instead.

However, Macron has made it clear, in unusually blunt language, that he is not just in Washington for the niceties.

On his first day of the visit Wednesday, when he toured NASA headquarters, Arlington National Cemetery and met US lawmakers, the French leader surprised his hosts with a bitter attack on Biden's signature policy to boost the US green economy, saying it would "kill" European jobs.

On Thursday, right before arriving at the White House, he repeated his criticism in an ABC television interview where he said Biden's policy would remove "a level playing field."

The legislation, called the Inflation Reduction Act, or IRA, is set to pour billions of dollars into environmentally friendly industries, with strong backing for US-based manufacturers.

The White House touts  IRA as a groundbreaking effort to reignite US manufacturing and promote renewable technologies.

However, European Union governments are crying foul, threatening to launch a trade war by subsidizing their own green economy sector.

"The consequence of the IRA is that you will perhaps fix your issue but you will increase my problem. I'm sorry to be so straightforward," Macron said on Wednesday, warning Biden could "split the West."

The White House responded by insisting that European companies have nothing to fear from the IRA.

The IRA "presents significant opportunities for European firms as well as benefits to EU energy security. This is not a zero-sum game."

Menu and music
Aside from the trade dispute, most of the visit revolves around kindling the long, if often slightly prickly US-French diplomatic friendship.

The state dinner at the White House will mark a return to grand-scale entertainment to Washington in a way not seen since the Covid-19 pandemic shut down the capital's typically busy schmoozing scene.

Grammy-award-winning American musician Jon Batiste will perform at the banquet, which the White House said will kick off with butter-poached Maine lobster, paired with caviar, delicata squash raviolo and tarragon sauce.

China high on agenda
Trade tensions, however, are only part of the uncomfortable flip side to the red carpet occasion.

Another gripe in Europe is the high cost of US liquid natural gas exports, which have surged to help compensate for canceled Russian deliveries.

There is also divergence on how to deal with the rise of superpower China. The question, with Washington pursuing a more hawkish tone and EU powers trying to find a middle ground, is unlikely to see much progress.

"Europe has, since 2018, its own, unique strategy for relations with China," tweeted French embassy spokesman Pascal Confavreux in Washington.

White House National Security Council spokesman John Kirby said China will be "very high on the agenda" this week but stressed that both countries share a broad approach.

"We believe that not only France, but every other member of the G7, frankly, our NATO allies too, see the threats and challenges posed by China in the same way."