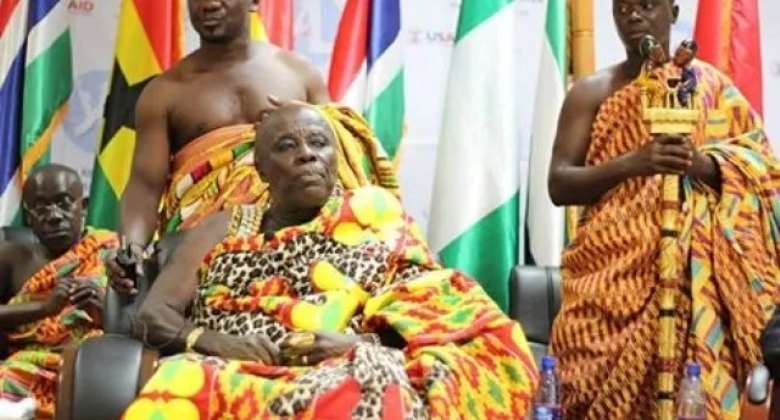 Osabarima Kwame Koh XI, Asamang Tamfoehene has described as falsehood the allegation that some monies have been paid to Ofori Panin Fie.

This week, the embattled Benkumhene of Asamang Tamfoe Traditional Area, Nana Boakye Darkwa opened up on some GHS115,000 he had allegedly paid to Ofori Panin Fie from mining activities carried out from his community.

He claimed that the amount was paid on October 7, as goodwill money which was duly collected and acknowledged by the Ofori Panin Fie.

Following his recent destoolment by Okyenhene Osagyefuo Amoatia Ofori Panin for allegedly being involved in illegal mining, Nana Boakye Darkwa is now demanding a refund of the GHS115,000.

“I am Osabarima Kwame Koh XI Asamang Tamfoehene and refuting the allegations made by the Benkumhene of Asamang Tamfoe against my overlord Osagyefo Amoatia Ofori Panin. The claim that an amount of money – Ghc115k has been sent to Ofori Panin Fie is palpably erroneous. Nothing like that had happened. Whatever was put out there to tarnish and impinge the reputation of Osagyefo Amoatia Ofori Panin is not correct,” Osabarima said in a rejoinder.

He added, “The Benkumhene’s utterances are not coming from Asamang Tamfoe palace. I and my other stool elders are not connected or involved with the spurious allegations churned out by the Benkumhene.

“I am very sorry and ashamed of the discourteous utterances that were uttered unashamedly by the Benkumhene. I unequivocally distance myself from that unruly behavior. The necessary rituals would be performed to destool him accordingly.”