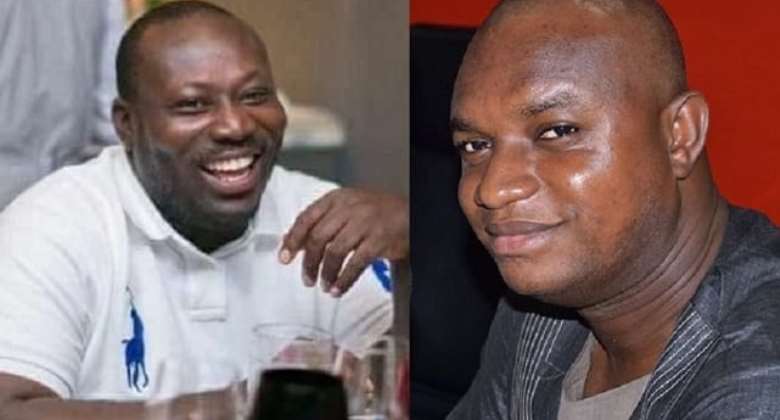 The campaign team of Brogya Genfi in his bid to become the National Youth Organiser of the National Democratic Congress (NDC) has issued a press release to respond to some allegations by the incumbent, George Opare Addo.

In the release, the incumbent has been accused of peddling lies against Brogya Genfi in a desperate attempt to retain his position.

“Having failed woefully to demonstrate any competence to organise, mobilize, inspire and provide the activism required of a National Youth Organizer in the last four (4) years, George Opare Addo is now deploying subterfuge in his interactions with Youth delegates as he tries to curry favour with them,” parts of the release signed by NDC Ashanti Regional Youth Organizer Osman Abdalla Nabali reads.

The release notes that the claim by George Opare Addo that he personally bought and distributed motorcycles to all Constituency Youth Organizers and Deputies during the 2020 General Elections, from his own personal resources, is totally false.

It explains that those motorcycles were bought and donated to the 275 constituencies of the NDC by the then Flag-bearer of the party, H.E John Dramani Mahama.

Describing many other claims by George Opare Addo as lies, the campaign team of Brogya Genfi has called for all aspirants to stay away from the use of lies in campaigning.

“In conclusion, it bears reminding Opare Addo that this Youth Election is not a contest of egos, but a contest to select a competent Youth Organiser with the track-record, experience and ability to energize the youth front of the NDC for victory in the crucial 2024 elections,” the release from Brogya Genfi’s campaign team reads.

BROGYA GENFI'S CAMPAIGN TEAM RESPONDS TO THE CAMPAIGN OF LIES AND CALUMNY OF THE DESPERATE INCUMBENT, GEORGE OPARE ADDO.

Having failed woefully to demonstrate any competence to organise, mobilize, inspire and provide the activism required of a National Youth Organizer in the last four (4) years, George Opare Addo is now deploying subterfuge in his interactions with Youth delegates as he tries to curry favour with them.

Although comrade Brogya Genfi has ignored the falsehoods being peddled by Opare Addo throughout his campaign, we deem it necessary to set the records straight lest some unsuspecting comrades are deceived.

The truth of the matter is that, Dr. Kwabena Duffour as a personal project set out to support some NDC Parliamentary Candidates and polling agents in the Ashanti Region and other regions in the run-up to the 2016 General Elections. This, he did through his errand boy, George Opare Addo, who was tasked to disburse the financial support to selected NDC Parliamentary candidates. It was pursuant to this initiative that an amount of GH10,000.00 was given by Dr. Duffour through his son, Dr. Kwabena Duffour Jnr. and his errand boy, George Opare Addo to some NDC Parliamentary Candidates in the Ashanti Region of which Brogya Genfi, who was running for the Suame Parliamentary seat at the time was part.

Sadly, part of the amount of money that was released by Dr. Duffour through George Opare Addo for Branch Executives in the Suame Constituency never got to them.

Nothing could therefore be further from the truth than Opare Addo’s claim that he has personally supported Brogya's parliamentary election bid in the past, for which the latter has been ungrateful.

2. Secondly, the claim by George Opare Addo that H.E John Dramani Mahama has endorsed his bid for National Youth Organizer, and that the former President is not enthused with people around him for supporting Brogya Genfi underlines the desperation of an incumbent who is looking to deceive delegates through influence peddling and emotional blackmail.

For the avoidance of doubt, H.E John Dramani Mahama has not endorsed George Opare Addo’s election bid for National Youth Organiser. This false narrative is disrespectful of the Fomer President and Opare Addo must stop spreading this falsehood forthwith.

Also, Opare Addo’s claim that people around Former President Mahama have constituted themselves into a cartel and are looking for a weak link to support as Youth Organiser is not only insulting, but confirms George Opare Addo's longstanding disrespect for these people. It is important to make the point, that the people Opare Addo refers to as a cartel around H.E John Mahama are bona-fide members of the NDC with the right to support whoever they deem fit in the ongoing internal elections.

3. Thirdly, the claim by George Opare Addo that he personally bought and distributed motorcycles to all Constituency Youth Organizers and Deputies during the 2020 General Elections, from his own personal resources, is totally false. Indeed, those motorcycles were bought by and donated to the 275 constituencies of the NDC by the then Flag-bearer of the party, H.E John Dramani Mahama.

In a few regions like Greater Accra, hard working regional youth organizers were able to facilitate and/or procure some motorbikes in addition to what was donated by the flag-bearer for Youth Organizers. George Opare Addo knows next to nothing about how the motorbikes that were distributed to Constituency Youth Organizers in the year 2020 were procured and must therefore stop the needless chest beating.

4. Again, George Opare Addo goes around telling Youth delegates in his interractions with them that comrade Sammy Gyamfi has endorsed Brogya Genfi because, he as the National Communication Officer of the party is not a member of a certain "Appointments Committee" established under Article 45 of the NDC's Constitution. His claim is that, Sammy Gyamfi wants to install his favourite youth organiser through whom he can lobby for appointments.

This claim is not only laughable, but same exposes the desperation of George Opare Addo. In the first place, there is no such "Appointments Committee" in the scheme of things in the NDC. The Committee established under Article 45 of the NDC's Constitution as amended, is known as the "Presidential Advisory Committee", which is intended to serve as a liaison between the party and government whenever the NDC is in power. The responsibility of that committee is to among other things, offer advice to the President who has the sole power to hire and fire all political appointees.

It is worthy of mention that even before the introduction of this provision in the NDC Constitution, all Presidents elected on the ticket of the NDC have in times past, done political appointments in consultation with the leadership of the party. Such consultations have always involved leading figures of the party such as the National Chairman and the Leader of the Parliamentary Caucus of the party, both of whom are not members of the Presidential Advisory Committee provided for under Article 45 of the NDC Constitution, as amended.

It is therefore naive for George Opare Addo to suggest to delegates, that appointments under the next NDC government will be solely done by a so-called “Appointments Committee" which does not even include the National Chairman of the party, the leader of the party’s parliamentary group and other leading national officers. This can only be a figment of Opare Addo’s own imagination.

Sammy Gyamfi’s endorsement stems from his belief in the competence and ability of Brogya to transform and lead a vibrant and courageous youth front to help the NDC recapture power in the 2024 elections and nothing more.

The suggestion that all those who support Brogya Genfi are doing so to gain appointments is baseless to say the least and George Opare Addo must desist from making such spurious allegations. In any case, if it is true that certain bigwigs are supporting Brogya Genfi so they can lobby him for appointments, that only goes to show the respect, strength and influence Brogya Genfi commands in the great NDC.

Quite clearly, these are the effusions of a desperate incumbent National Youth Organizer who should be trumpeting his track-record after four years in office, but is rather busily touting his supposed influence on appointments when the NDC has not yet won elections. Political appointments are the prerogative of the President who usually does so through a consultative process, hence this desperate message should be treated with utmost contempt.

Instead of putting the cart before the horse as Opare Addo is seeking to do, Brogya Genfi is focused on building and leading a vibrant Youth Wing to recapture power for the NDC in 2024 first, before he vigorously lobby for strategic appointments for the Youth in critical sectors of the country. And this plan he continues to share with delegates as he tours the country.

5. Finally, George Opare Addo in his numerous personal attacks on various personalities in the NDC who do not support his bid, is on record to have labelled the Member of Parliament for Ningo-Prampram, Hon. Sam George as an ingrate that he Pablo has supported throughout his political life, including during the 2020 General elections.

While we do not purport to speak for Hon. Sam George, the point ought to be made that this is yet another barefaced lie by a man who is clutching on to straws. This lie shall be exposed in the coming days.

In conclusion, it bears reminding Opare Addo that this Youth Election is not a contest of egos, but a contest to select a competent Youth Organiser with the track-record, experience and ability to energize the youth front of the NDC for victory in the crucial 2024 elections.

Brogya Genfi’s long years of commitment and service to the great NDC is there for all to see, having gone through the mill by serving as the Branch Youth Organizer for the Roman Catholic Church Branch of the NDC in Suame, the Organizer for TEIN, Kumasi Technical University, Deputy Constituency Propaganda Secretary for Suame, Ashanti regional Youth Organizer and the NDC Parliamentary candidate for Suame in the 2016 general elections.

Brogya Genfi has consistently made a genuine and compelling case for his quest to lead the NDC Youth Wing based on his track record, competence, and vision for the NDC Youth Wing. His five-point Agenda for the NDC Youth Wing seeks to establish an NDC Youth Fund to resource the youth wing. Brogya will also establish a Zonal Youth Entreprise Scheme, while the visionary Atta Mills Youth Leadership Fellowship initiative seeks to provide a platform for grooming future leaders of the NDC. His vision for TEIN is to make it a truly intellectual wing of the party that is vibrant and ready to lead the party’s effort to propagate its message and protect the ballot. This is what the visionary and courageous BROGYA GENFI brings to the table. And we know without a shudder of doubt, that at the end of this contest, the truth will rise above falsehood as oil above water.

We humbly urge the discerning Youth of the great NDC to reject a desperate incumbent whose only message is influence peddling, emotional blackmail and self-invented lies and Vote Number 1 on 10th December, 2022. Vote BROGYA GENFI for a Youth Leadership of Courage that will help the NDC and H.E John Dramani Mahama recapture power in the crucial 2024 general elections,