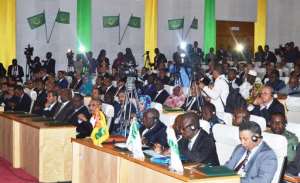 To see is what is needed for walking safely without help. To walk with purpose in the right direction and not anyhow needs a vision of destiny.

The proclaimed slogan "Ghana beyond Aid" is a sweet snake in anybody's ears. The reality of performance yet makes any Ghanaian wonder what words of a manifesto really mean.

Nelson Mandela and his vision of a Rainbow Nation were the words that kept him going for 27 years on Robbin Island while behind thick prison walls. His vision and the words that were spoken became his personality, him through and through. The same goes for Mahatma Gandhi, Marc Aurel, Alexander the Great, and Zar Katherine the Great followed by Zar Peter the Great among others.

Time to see his vision was not on Nelson Mandela's side as he had grown old. His successors plaid to the tune of a better life for all in a better nation. 31 years down the line of history 45% of 60 Mio. South Africans are unemployed, one and a half generations after the official end of apartheid.

Paul Kagame of Rwanda helped to end the genocide in his country. With an iron fist did he bring about peace and economic progress in the once-troubled nation. The blood of 1 Mio. dead Hutus and Tutcies all over the hills of the nation are a reminder of the need to overcome tribalism. What had started as a healing process matured into economic development well recognized and often criticized by politicians in his own country. As a military officer, he has come far in his capacity as President. Like so many army men he is a man of action not a man of vision. Even though it must be said that his actions come very close to what can be seen as a vision.

The vision for a nation is based on a deep understanding of the past, seeing the impossible that stands out in the world of NOW, and finding a direction to make it possible and the right approach to take most of all citizens along. Vision without this embedded power, energy, and drive is a dream come true or not come true.

Dr. Kwame Nkrumah took Ghana out of the hands of the British Empire. He fought for his vision of a united Africa and helped to form the African Union. He had high hopes and ambitions but did not let African traditions translated into modern-day Africa and the world of the 20th century stand at the center of the words spoken. Values of humanity must at all times drive a vision to completion and fulfillment.

Presidents of Angola, Zimbabwe, and Mozambique were copycats of an idea that was never intended for them and without deeper reflection imposed it on their nations seeing their people suffer from their policies so did their foreign bank accounts under the heavy load of stolen national assets.

Africa is the new next frontier of great hopes and great visions.