The verbal assault of a nurse by Opoku-Mensah: Looking at some fatherhood issues therein 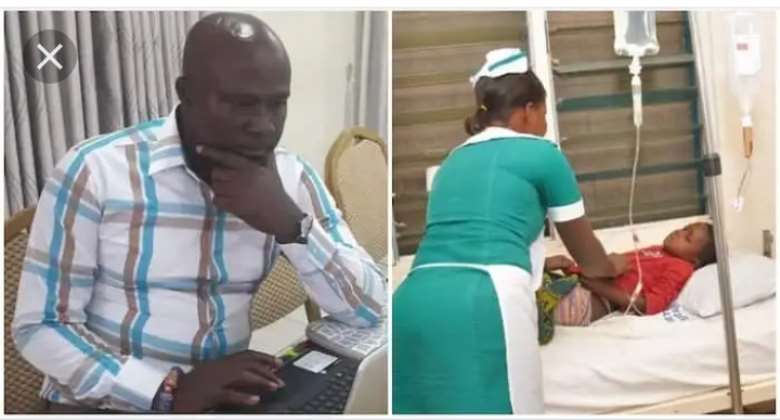 Yesterday, Tuesday 29th November, 2022 was a very tiring day for me. I was relaxing at home with the initial cacophony from my kids who were watching cartoons when I received a WhatsApp message from a nurse who works with the Cape Coast Teaching Hospital.

The message contained voices in an audio recording purporting to be an altercation between some people at the Manhyia District Hospital. There was a narration added to it including a press statement coming from the Ghana Registered Nurses and Midwifery Association (GRNMA) condemning what transpired at hospital and seeking some other reliefs from government.

I only woke up this morning to witness a slew of stories on various news portals bringing various angles to the incident and revealing the main protagonist whose voice was in the audio as the Current Ashanti Regional Director of the National Service Secretariat, Mr. Alex Opoku-Mensah.

The sorry has it that, the Ashanti regional NSS boss followed his daughter who is a House Officer at the Manhyia District Hospital, who had early on received a call from a nurse drawing the House Officer's attention to a prescription which wasn't available at the pharmacy which needed some correction to avoid the patient from paying. To this, Mr. Opoku-Mensah accompanied his daughter to verbally assault the nurse who, according the audio recording, Mr. Opoku-Mensah feels has persistently harassed his daughter.

It is against this background, that as a Fatherhood Advocate I'm trying situate the whole brouhaha in that context of fatherhood.

One of the most cardinal responsibility of every father is to procreate and protect their offsprings. In this regard, it is natural and understandable that Mr. Opoku-Mensah had to try to protect his daughter (the House Officer) after spending so much on her education and training, but, to go and verbally assault a nurse in such a tumultuous manner at a health facility shows a deficit in his Fatherhood style.

As a Fatherhood Advocate reading from Nana Yaw Osei's Facebook Wall regarding the matter, he states "You see where your uncouth (unrefined, crude) behaviour is leading you to. Anybody who knows you closely knows that it's your nature to be uncouth". This portrays Opoku-Mensah as someone who has a character deficit.

If the cacophonous verbal exchanges in the audio and Nana Yaw Osei's position is anything to go by, then I can fairly surmise that the protagonist (Mr. Opoku-Mensah) may have a deficit in father/son relationship, or suffered from an absentee father, or is an over pampered son who is exhibiting same as a dad.

Such a deficit in his character connotes that his dad's influence in him was negligible or absent. Fathers are the bastion of every family. They are the ones who exercise equipoise under all circumstances, and same are transfered to their children especially their sons through their actions and deliberate coaching. For a man of such stature to disgracefully go and taunt the daughter's adversary assuming that is so, needs much to be desired and shows a fatherhood deficit in his upbringing.

When the matter came up, Prof G. K. T. Oduro, an Educational Leadership Scholar has waded into the matter questioning his leadership skills. "By his action, his daughter has been presented as an over pampered lady with a weak personality who lacks assertiveness in matters of decision making." This portrayal of the lady from his father's own actions shows leadership deficit as a dad, which he is unfortunately transferring to his daughter. Another interesting angle of the Educational Leadership Scholar’s supercilious nature of Mr. Opoku-Mensah, "Let's face it , the 'I will show you where power lies’ leadership orientation exhibited by Mr. Opoku-Mensah needs condemnation." When people lack proper father training and/or father impact, they grow with a certain psychological disposition feeling supercilious.

Anyone who feels too important than others has a psychological deficit which normally emanates from father absence.

From the audio, he taunted the nurse as if being a nurse is an awful career and being a medical officer on the other hand is better. This attitude from the NSS boss clearly demonstrates a deficiency with his fatherhood style and training to his daughter.

Good fathers inculcate into their kids that, all men are created equal and everyone is very important irrespective of the work they do. Fathers must teach their children to appreciate that, a good piece of symphony is achieved with a blend of the black and white keys of an organ. Thus, Mr. Opoku-Mensah ought to have known and taken the so called misunderstanding between his daughter and the nurse easy.

Like the black and white keys of an organ producing good symphony, in the health profession, all other health workers play a role in the delivery of quality health service to patients. No one is important than the other.

The actions of Mr Opoku-Mensah has dented the image of fathers. However, the attitude of the young girl who was under the barrage of needless verbal attacks from him needs commendation. She was able to stay calm and poise irrespective of what happened. This gives me some hope that there some fathers are having positive impacts on their kids. This is refreshing.

This isn't to say that, assuming the girl had gotten angry and retorted back would mean her father too has failed like Opoku-Mensah. No, far from it. Fathers must teach their kids to stand up to bullies like Mr. Opoku-Mensah. His actions are a disgrace to Fatherhood.

In sum, inasmuch as I disagree with the GRNMA position of giving the government an ultimatum to sack the Ashanti Regional Head of NSS, the country must begin to fashion out policies and programmes at all levels of our society to ensure improved father relationships and their impact on their children.

We all must all appreciate that, all the morally debauched behaviours that are rife in our society is rooted in the lack of proper father impact on kids which we have not taken seriously as a people to deal with.

To curtail what happened at the Manhyia District Hospital, which clearly shows a lack of respect on the part of Opoku-Mensah and his daughter towards a nurse, we need to take issues of Fatherhood more seriously than we are doing now.