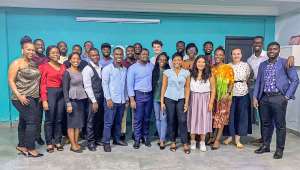 A pan-African, youth-led network, Africa Alpbach Network (AAN), has reawakened its intra-member and external corporation via a series of meetings and networking events.

The one-week event organized among the members of the AAN in reflection on its past achievements was done to draw an effective roadmap for the years to come.

After a week of strategic planning and meetings, it ended with a light-hearted cocktail party held at the Bamboo House, Trasacco road in Adjiringanor, Accra, on Friday, November 18, bringing together all stakeholders to connect and network.

Setting the party in motion, Alhassan Muniru, a co-founder and board member of the AAN, who is also the founder of Recycle-Up Ghana welcomed the network’s members and guests, who came from various African countries such as Nigeria, South Africa, Uganda, Zimbabwe, Ghana, Zambia, Lesotho, and others.

He reiterated the network’s goal, which is to give an avenue to vibrant African youths to embark on intercontinental dialogue, policy engagement and debate, to garner problem-solving skills and generally cultivate an open culture that will produce real change on the continent.

The meeting in Ghana according to the front runners is the first non-virtual meetup on the continent since the AAN's inception in 2019 as they have been having all their activities online — held two virtual summits, bringing on board some astute African speakers.

Opining about their achievements since 2019, Mr. Muniru on the sidelines told Modernghana News that "being able to withstand the odd moments birthed by the prompt influx of the Corona Virus pandemic is even our biggest achievement, and aside from that, our achievement comes from the achievement of our members."

The individual imprint of its members on the African continent, impacting other youths, summed together, according to Mr. Muniru, is an indication that the network has a lot to offer to improve positive African inclusion on the global stage.

Going forward, the network plans to organize bigger African continental forums where they will draw up plans to influence policy directives in their respective countries and also promote the Africa Union’s (AU) Agenda 2063, which is "Africa's blueprint and master plan for transforming Africa into the global powerhouse of the future."

How the Africa Alpbach Network came into being

The Africa Alpbach Network was founded by a group of young African visionaries, graduate and postgraduate scholars, and professionals who attended the European Forum Alpbach (EFA) in 2019 and wanted to keep the "Alpbach spirit" alive through an alumni network that reflects on the African continent's needs and aspirations.

These stakeholders are driving the network to inspire, challenge and share ideas about contemporary issues in Africa, Europe and the world at large.

By that, the network provides them with a neutral and non-partisan space where the young African intellectuals engage in critical and problem-solving dialogue for the future of the continent.

According to the alumni network, this representation is critical because it helps to increase continental dialogue between Europe and Africa, change perceptions, and promote homegrown ideas and solutions through webinars, forums and ideation challenges.

With the support of the European Forum Alpbach Foundation (EFAF) the Robert Bosch Stiftung GmbHand other well-meaning partners, they believe that a pan-African movement led by youth will continue to inspire and drive social and economic prosperity, as well as promote long-term Africa-Europe integration.

They identified the need for such a continental platform for intergenerational dialogue among African intellectuals and the rest of the world before its establishment, in addition to strengthening participation in the annual forum.

About the European Forum Alpbach

Annamaria Tóth told Modernghana News that the idea was conceived by the two Austrian philosophers, Otto Molden then a Viennese student, and Simon Moser then an Innsbruck philosophy lecturer, who established the "international university weeks" in 1945, three months after World War II ended, in the Tyrolean village of Alpbach.

The meeting has been held annually in August since then, but under the name "European Forum Alpbach" starting in 1949.

In the early years, the majority of participants were young people who were actively involved in the resistance to National Socialism.

The idea of the “university weeks” quickly gained support from the French occupying power and the first governor of Tyrol. Dr. Karl Gruber, who also came from the resistance, was one of the European Forum's early supporters.

Together with a group of like-minded individuals, the visionary student advocated for European political unification, which was seen as the only way to avoid future warlike conflicts.

Simon Moser, for his part, advocated for new university structures as well as interdisciplinary exchange.

From these interests, a fruitful dialogue developed, which over the years involved not only science and politics but also the cultural sphere and economic development.

The European Forum at Alpbach made a very significant contribution to the intellectual life of post-war Europe.

In particular, the mediation between science and practice was an important goal from the very beginning.

After nearly eight decades, the European Forum Alpbach (EFA) continues to serve as a platform for ideas for a more empowered and democratic Europe.

It brings together the next generation of leaders in Europe and beyond, as well as the most innovative minds, decision-makers, and experts from politics, business, science, culture, and civil society from around the world, to engage in and contribute to its mission.

The annual forum is held in the Austrian village of Alpbach in the summer and is almost always attended by high-profile world leaders, including Austrian presidents and opinion leaders, as well as vibrant and energetic youths from numerous parts of the world who apply for and are awarded scholarships to attend the event.

These and many others form clubs and networks united by shared values from the forum, one of such networks is the Africa Alpbach Network.

If you need cheap oil you don’t trade gold; take off taxes –...
30 minutes ago

2024 election: NPP struggling to come up with campaign messa...
30 minutes ago