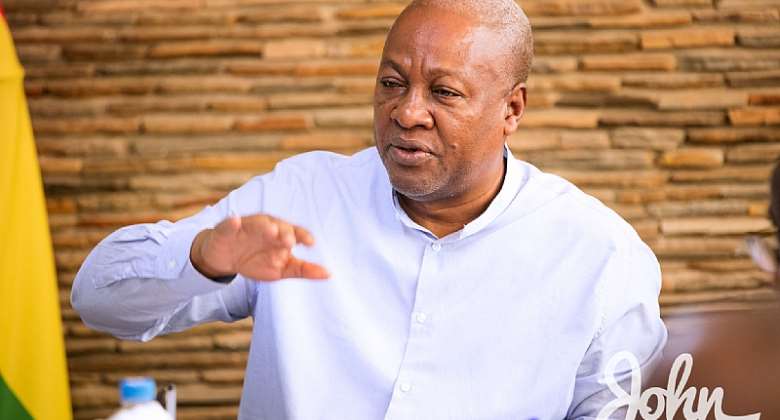 Former President John Dramani Mahama has rallied the support of Ghanaians for government as the country’s economic crisis continues to hit hard.

The former President told Ghanaians to support government efforts in their own little ways to redeem them from the recent economic hardships.

The 2020 NDC presidential candidate was speaking at the funeral rites of the late Alhaji Mumuni Mankama, a staunch member of the National Democratic Congress (NDC), at Wa in the Upper West region.

He stressed that joining hands with a sense of patriotism beyond political and family considerations will see to the swift discovery of the country’s economy.

“We must all do what we can in our own little ways to ensure that the economy recovers, so let us all hold hands together as Ghanaians beyond political considerations, beyond family considerations to make sure that we recover this economy," he pleaded.

Meanwhile, amidst the numerous unfavourable ratings for the last months that have scared away investors, international rating agency Moody's has again downgraded Ghana’s credit rating from Caa2 to Ca.

“The Ca rating reflects Moody's expectation that private creditors will likely incur substantial losses in the restructuring of both local and foreign currencies debts planned by the government as part of its 2023 budget proposed to Parliament on 24 November 2022.

“Given Ghana's high government debt burden and the debt structure, it is likely there will be substantial losses on both categories of debt in order for the government to meaningfully improve debt sustainability," portion of the statement by Moody highlighted.

“The stable outlook balances Moody's assumption that the debt restructuring will happen in coordination with creditors and under the umbrella of a funding program with the IMF against the potential for a less orderly form of default that could result in higher losses for private-sector creditors," the rating firm further explained.