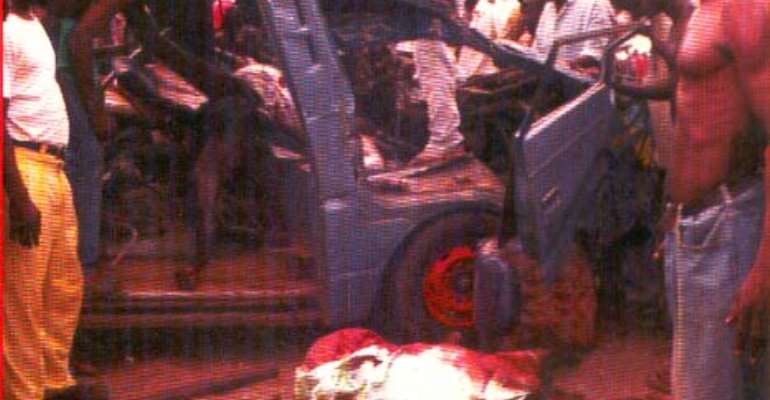 Two instances of the usual bloody pre- Christmas road carnage in the country were recorded last Sunday, claiming the lives on the spot at Weija in Accra and Dominase in the Ashanti region.

In the first tragedy, the recklessness of a tipper truck driver led to the killing of two persons, including a prominent Accra banker, at Weija on the Accra- Kasoa Highway.

Then, barely three hours later, a bus loaded with fish mongers collided with a cargo truck at Dominase near Anwiankwanta, resulting in seven deaths on the spot and severe injuries to many others.

The banker who died in the Weija accident has been identified as George Ampomah, a top official of SG-SSB Bank, while the other deceased person, a female adult is yet to be identified.

Mr Ampomah was said to be returning from Cape Coast to Accra after attending the congregation of the University of Cape Coast the previous day. His son was among the graduands.

The bodies of the two persons have been deposited at the Korle Bu Teaching Hospital for autopsy.

An eye witness, Emmanuel Afful said that instead of using his carriage way by turning at an intersection, the tipper truck driver, who absconded after the accident decided to have a short cut by taking the opposite carriage way on the Accra- Kasoa Highway.

Mr Afful said when Mr Ampomah realised that the tipper truck driver had mistakenly and dangerously taken his route, he swerved and applied his brakes to avoid a head on collusion but the truck ran into his vehicle, mangling it in the process.

Mr Afful said it took him and his colleagues a hectic time before they could retrieve the bodies of the deceased from the wreckage.

A large number of people at the scene, including this write, could not identify the deceased until some time later when Mr Ampomah's friends, with whom he attended the congregation, reached the accident spot and identified him.

The Kasoa Police are looking for the tipper truck driver.

In the Anwiankwanta accident, six fish mongers and the 207 Mercedes Benz bus, who was identified as Emmanuel Kye, alias Sunday, were killed in the crash when the bus, with 27 passengers and travelling from Kumasi to Agona Nkwanta in the Western region, collided with the Mercedes Benz truck.

Police sources said the accident occurred at 6.30 pm when the driver of the Mercedes Benz cargo truck, with registration number GT923 H, attempted to over take an articulated truck in a curvy hill at Dominase.

Two of the fishmongers, who are yet to be identified, together with the driver of the cargo track, “who was identified as Stephen Osei, were said to be in critical condition and are on admission at the Intensive Care Unit of the Komfo Anokye Teaching Hospital.

The remains of the deceased have been deposited at the KATH mortuary for autopsy.

Four persons who received various degrees of injury were admitted to the Dominase SDA Hospital.