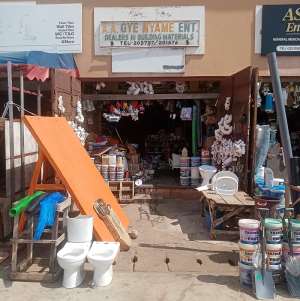 Scores of traders in Tema Community One have expressed concern that the frequent fluctuation of Ghana’s Cedis has eroded the investment capital of dealers in the retailer sector, especially those dealing in building materials and called for urgent measures to deal with the instability in the economy.

The majority of the dealers in building materials expressed the fear of losing their business capital and going bankrupt.

Mr. Kwabena Ameyaw, who deals in cement, roofing sheets, and plywood in Tema Community One on Padmore Street also affirmed that the depreciation of the Ghanaian currency is making them run at a loss as captured by the Communication for Development and Advocacy Consult (CDA Consult) in Tema.

Mr. Roland Nii Dortey Kuma, who sells roofing sheets and plumbing materials in Tema Community One Market explained that the economy is difficult due to the system of government the nation has adopted.

He strangely blamed the multi-party democratic governance multifaceted with the winner-takes-all as the bane of the country’s economic problems, stressing “the country needs a traditional rule.

"I prefer the traditional chiefs ruling us, we wouldn't have to pay taxes, and our issues will be resolved quickly like we do the local area".

Mr. Kuma on behalf of dealers of building materials appealed to authorities to consider their plight and resolve the economic challenges to keep them in business.

Mr. Godwin Owusu, Manager of A. A. Gye Nyame Enterprise, dealers in building materials attributed the challenges to the accumulation of taxis and levies imposed on the business community, stressing “we are suffocating under the burden of taxes, we need respite from the state”.

He said the price variation does not depend on only the changes in the value of the cedi to the dollar but “we also take into consideration when the goods brought in, an old stock may be sold a little lower than new stock”.

Mr. Owusu noted that anytime “I want to restock I pay more for the same amount of goods. Two years ago I had stable capital for this business but this time I either add money or take some goods on credit because of the frequent increases in prices.

"I almost lost my life during the election because I believed the government was going to make our lives better but I have decided not to vote again. Life is difficult on my side.

“Heads of institutions who are not doing well are not replaced, they have left them to make life harder for everyone. All they care about is taxing people".

Other dealers interviewed also expressed similar apprehension and called on Parliament to ensure that the budget reduces the burden on the business community.