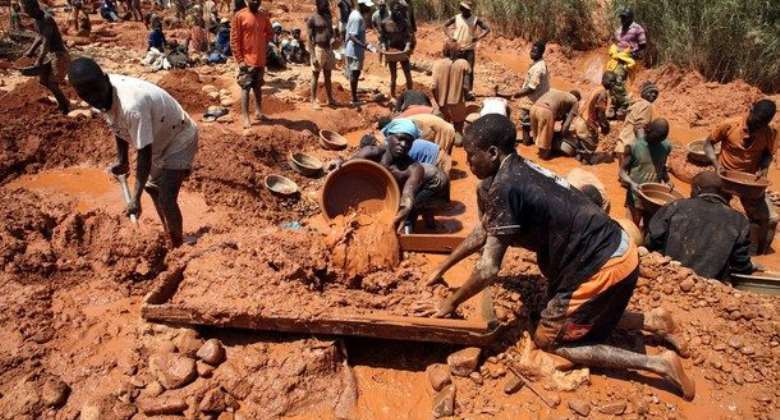 The Deputy Minister for Lands and Natural Resources responsible for Mines, George Mireku Duker says placing a ban on small-scale mining in Ghana will do the country more harm than good.

According to him, the fact that small-scale mining contributes an average of up to 40% of the total gold produced in the country and employs over 1 million Ghanaians among many other benefits the sector offers, makes it key contributor to the country's economic sector.

The Deputy Minister made this statement in an engagement with editors of the key media houses in Accra on Tuesday, 29th November, 2022 to among others sensitize them on the regularisation of the small scale mining sector.

“Zambia and Sundan have come to emulate from us and currently, the South African High Commissioner is at the Ministry with the same purpose, to understudy Ghana's small-scale mining sector” he added.

Mr George Mireku Duker in an all-encompassing presentation touted the gamut of measures government has put in place to curb the illegal mining menace, which among other things include Operation Halt II, Community Mining Scheme (CMS), Training of River guards.

On the procurement of speed boats and training of river guards, Hon. Duker stressed that “we are not just doing a talk shop here, we are on the grounds and the whole mentality is to get our river bodies cleaned.”

Responding to a question from one of the editors on the confiscated excavators, Hon. Duker disclosed that the excavators have been handed over to the Ghana Police Service, adding that details about the seized excavators will be made available to the media practitioners.

He made it clear that the fight is a herculean one but government is making all the necessary efforts to win and will welcome inputs and expert views from the media on how to effectively communicate the strides made by the government in this regard.

He used the opportunity to debunk all allegations levelled against him as being neck-deep in the galamsey menace stressing that ” I have never been a miner and I will never be, I have only studied and have a good knowledge of the subject matter and that should be on record.”

Shortly after his presentation, the Deputy Minister led the news editors to the Mineral Commission’s situational room where modern technological gadgets and software for the tracking of all earth moving equipment and explosive machines will be commissioned in December this year.