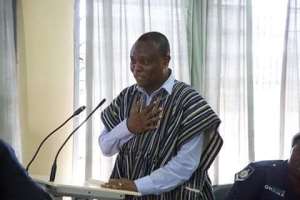 Prof. George K. Oduro, an Educational Leadership Scholar and former Pro VC of the University of Cape Coast has said the House Officer whose father verbally abused a nurse at the Manhyia District Hospital should be sanctioned for failing to use the redress procedures of the hospital.

In a Facebook post on the topic 'Soft Skills Matter In Leadership', Prof. Oduro shared "Actually, if I were the Regional Director of Health Services, I would have caused a disciplinary action to be instituted against the Doctor for violating the redress structures of the hospital and instead seeking redress through her father. As a father myself, I find the man's behaviour unfortunate. He has done his daughter more harm than good."

According to Prof. Oduro, the action of the house officer's father rather portrays the daughter as an over-pampered lady with a weak personality who lacks assertiveness in matters of decision making.

"For how long would he be following her daughter and fighting for her? It is hear1qw`twarming though that Mr. Opoku-Mensah is alleged to have apologised for his behaviour. The apology is however not enough," he adds.

The former Pro VC argues that, the National Service Secretariat should support Mr. Opoku - Mensah to develop soft skills necessary for providing respect-indexed leadership for all categories of people and professions. "Let's always remember that positions are never possessions. Every profession, no matter the level, matters in our development as a nation."

According to the Educational Leadership Scholar, after listening to the audio of the verbal exchanges between the Ashanti Regional Director of the National Service Scheme, Mr. Alex Opoku - Mensah and the nurse at Manhyia Hospital, "I asked myself one question: do soft skills have any place in the criteria used in appointing Directors of the Regional National Service Scheme?"

He added, "What surprises me most is the confidence with which the Director asked the nurse, 'Do you know who I am?' You're a nurse and so what? Followed by threats of causing the transfer of the nurse."

This, Prof. Oduro finds problematic and ought not to have happened at all. He questions whether, as Director of the National Service Scheme, was it appropriate for him to interfere with the conflict resolution structures of the Ghana Health Service. "Could her daughter, the Doctor, who had an issue with the nurse not have sought redress through the disciplinary structures of the hospital?"

The former Pro VC however questions again, "Is it that her daughter did not have confidence in the redress structures of the hospital? What would have happened if the nurse had also invited her father to attack the Director's daughter, the Doctor?"

In his view "It is an affront to the decorum indexed to the position of a Director and institutional leadership."

He stressed that "As an advocate for the functionality of institutional structures and procedures, I am very passionate about acts that affront procedures. The man's action demonstrates disrespect for Management of the Manhyia District Hospital and the Regional Director of Health Services."