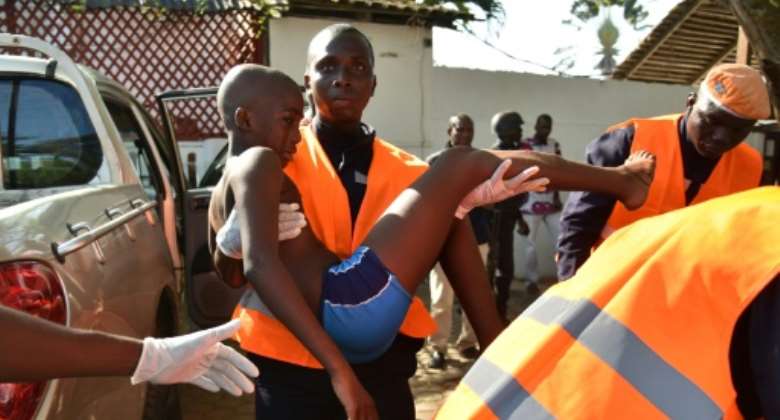 A rescue worker carries a young boy who was wounded in the attack. By Sia KAMBOU (AFP/File)

A court in Ivory Coast on Wednesday began the long-awaited trial of 18 people accused of abetting one of West Africa's bloodiest jihadist attacks -- a machine-gun assault on a beach resort in 2016 that left 19 dead.

But only four defendants were physically present for the proceedings in Abidjan, Ivory Coast's economic hub, an AFP reporter saw.

The others, including the suspected masterminds, are either on the run or being held in Mali, said Aude Rimailho, a lawyer for civilian plaintiffs.

People look at clothes left on the beach following the attack. By ISSOUF SANOGO (AFP)

In an operation echoing a jihadist massacre the previous year in Tunisia, the trio stormed the beach and then attacked several hotels and restaurants.

The 45-minute bloodbath ended when the three were shot dead by Ivorian security forces, who themselves suffered three fatalities.

It said the attack was in response to anti-jihadist operations in the Sahel by France and its allies, and targeted Ivory Coast for having handed over AQIM operatives to Mali.

Several dozen people were arrested, including three suspected accomplices of the dead attackers, who were detained in Mali.

The charges against the 18 include acts of terrorism, murder, attempted murder, criminal concealment, illegal possession of firearms and ammunition "and complicity in these deeds," Public Prosecutor Richard Adou said last week.

Nineteen people were killed -- nine Ivorians, four French citizens, a Lebanese, a German, a Macedonian, a Malian, a Nigerian and a person who could not be identified.

Rimailho, representing French plaintiffs, said in the runup to the trial that the 18 were "small fry" and cautioned against seeing the proceedings as a chance for closure.

"The people who planned the operation are in Mali," she said.

The prospects of seeing them on trial there are clouded by "the chill between France and Mali," she said, referring to a breakdown in relations between Paris and the Malian ruling junta.

Mali is the epicentre of a decade-long jihadist revolt that has shaken the Sahel, claiming thousands of lives and forcing hundreds of thousands to flee their homes.

The attack on Grand-Bassam was the first and deadliest in a string of sporadic attacks on countries lying on the coast of the Gulf of Guinea, south of the Sahel.

In Ivory Coast's case, the assault had a deeply chilling impact on foreign tourism, an important money-spinner in an economy battered by a post-election conflict in 2010-11 that claimed 3,000 lives.

He is described by Ivory Coast investigators as one of the instigators of the Grand-Bassam attack and by Burkina Faso as the "operation leader" in an assault on the Burkinabe capital Ouagadougou in January 2016 that claimed 30 lives.