Farmer remanded for shooting his friend in hunting expedition 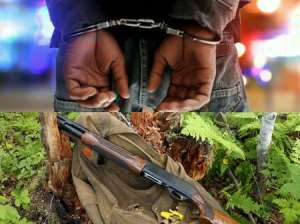 Kofi Mbroh, a farmer, aged 42, from Assin Adiembra in the Assin South District of the Central Region has been remanded in Police Custody for attempting to kill his young friend, Mr Kofi Amoah with a gun.

The Assin Fosu District Court presided over by Mr. Abdul Majid Illiasu did not make his plea after charging him with attempted murder, contrary to section 48 of the criminal offences Act 29/60.

Chief Inspector Gilbert Ayongo, the prosecutor, said the victim Mr Amoah 23 and the accused, Mbroh are friends who live in the same vicinity at Assin Adiembra.

He said the victim’s father has a locally manufactured gun, which the victim and the accused had been using for hunting.

On Tuesday, November 08, 2022, around 0800 hours, the two friends left home for their usual hunting, toiled, but could not hunt any game and returned home in the afternoon.

In the evening, the same day, around 1800 hours, the accused again called the victim and asked that they go for night hunting, hoping to get snails if they did not get any animal.

The victim heeded to his request and both went with the gun loaded with two AAA cartridges, handled by the accused.

The accused allegedly led the victim into a deep forest at the outskirts of Adiembra town and asked him to wait under a tree while he hunts for an antelope.

The victim said whilst seated, he saw the accused going round the tree from a distance, flashing the torch at him.

Sensing danger, the victim said something struck him to run, so in the process of running, he was shot from behind and he fell.

The prosecutor said the accused approached the victim, thinking he was dead and hurriedly left the scene.

The accused returned the gun to the victim’s house and allegedly informed them that the victim had left for his father’s farm and would return soon.

He said the victim managed to crawl to the roadside around 07:00hrs, the next day and was rescued by a tricycle rider.

The tricycle rider rushed the victim to the St. Francis Xavier Hospital at Assin Fosu for treatment and he was admitted.

The accused was subsequently arrested for investigations.