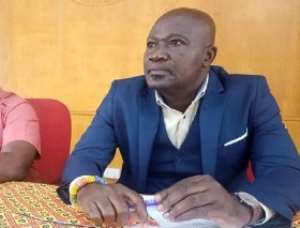 The Ghana Registered Nurses and Midwives Association (GRNMA) has called for the dismissal of Mr. Alex Poku Mensah, Ashanti Regional Director of the National Service Secretariat.

The agitation for his dismissal comes after he allegedly assaulted a nurse at the Manhyia District Hospital on Sunday, November 27, calling her all sort of image-diminishing names as captured on tape.

Reports indicate that Mr. Poku Mensah got a report from his daughter, who works at the facility as a house officer, telling him about a supposed disrespect toward her.

A report his father sided with without first conducting an investigation probably due to his influence.

The assaulted nurse reportedly called Mr. Poku Mensah’s daughter, who was then out of the facility, to come to the hospital, log into the E-Health system, and update a patient's prescription order so that the patient is not billed for unissued drugs.

The GRNMA, in a letter signed by Madam Perpetual Ofori Ampofo, President and David Tenkorang-Twum, General Secretary in a statement today, Tuesday, November 29 said the NSS Regional Director is unfit for his job.

They have given a 72-hour ultimatum to government indicating that refusal to heed their demand will result in a sit-down strike in the Ashanti region and subsequently the entire nation.

Read a copy of the release from the GRNMA as copied to Modernghana News below;

The attention of the leadership of the Ghana Registered Nurses and Midwives Association (GRNMA) has been drawn to an audio recording emanating from Manhyia District Hospital in the Ashanti region in which a male voice is heard raining insults on a nurse and for that matter all nurses and midwives in Ghara.

From the said audio, the male voice has been identified as Mr. Alex Poku Mensah, popularly called Omens, who is the Regional Director for the National Service Scheme in the Asharti region who also happens to be the father of the House Officer who had a misunderstanding with the nurse. Having considered the content of the audio and the report received from our Ashanti Regional branch, the leadership of GRNMA wish to state as follows:

1. The Public Services Commission and Government for that matter should sack the said Regional Director immediately because he is not fit for the Director position he holds in the Public Service. He had absolutely NO RIGHT to enter Manhyia District Hospital and verbally abuse and threaten the nurse in question who was on duty at the time.

As a Director, he should have known that Manhyia District Hospital had a Medical Superintendent and a Nurse Manager under whom the nurse works and if indeed ho had any complaint to make, they were the people he should have engaged and not to go to the hospital and fight the nurse on behalf of his daughter.

We wish to state categorically that the government does not relieve Mr. Alex Poku Mensah of his duty as Ashanti Regional Director of the National Service Scheme within 72 hours, nurses and midwives of Manhyia Hospital will be called upon to lay down their tools, followed by the whole of Ashanti Region and then it will be escalated to the whole nation.

2 The Management of Manhyia Hospital should ensure that the House Officer is schooled on her role in the Medical Team and the fact that Nurses and Midwives are patient's advocates and will continue to advocate for their patients and clients even if it makes another member in the team uncomfortable.

In this particular instance, the nurse had used her own phone and her own call credit to call the said House Officer to come to the hospital and log into the E-Health system and update the patient's prescription order so that the patient is not billed for unissued drugs.

In order for peace and harmony to prevail at the facility, we additionally call on the management of the hospital to take all the professional staff through Team Building and Team Work to foster unity of purpose at the facility.

2. All nurses and midwives at the Manhyia District Hospital should remain calm and go about their normal duties and wait for further directives from the leadership of the Association which will happen if need be.

Nurses and Midwives around the country are also called upon to continue providing quality nursing and midwifery services to the good people of Ghana and not to be distracted by the actions of Mr. Alex Poku Mensah and his daughter.

3. The GRNMA Ashanti Regional Branch leaders are directed to report the matter of Mr. Alex Poku Mansah's verbal abuse and throats on cur comrade to the Police immediately and report on same t the GRNMA Headquarers.

5. We cal on all persons holding high positions in the Public or Civil Service to appreciate the fact that. the positions of authority or service they hold, simply involve responsibility to the public and never must be used to threaten, undermine or intimidate the same people it is supposed to serve.