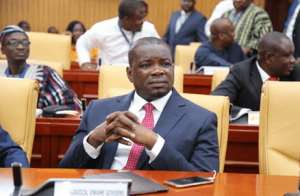 The Minority in Parliament has accused companies that assemble vehicles in Ghana of deliberately taking advantage of the tax incentives offered by government without matching up to standard.

The group contends that such firms often bring in the vehicles in their almost complete state, yet offer their products at exorbitant prices to the public.

This follows the withdrawal of a directive by the government to ban the importation of used vehicles from next year.

Speaking to journalists, the Ranking Member on the Roads and Transport Committee of Parliament, Governs Agbodza called for further stakeholder consultations before the implementation of the policy.

The Member of Parliament for Adaklu indicated that Ghanaians will usually opt for second-hand vehicles because they are relatively affordable compared to locally assembled vehicles.

“I have seen one or two [automobile] companies claiming they are assembling vehicles. These vehicles come almost complete. If you assemble a vehicle, and you take out the axle and the tyres, and you come here, I don't consider that as assembling. That is almost a full vehicle. What they are doing is taking advantage of the tax incentive that gives them that opportunity. When we see a vehicle assembling plant, the footprint of the organization, it's sometimes a whole city.”

“The average vehicle they are selling the cheapest is probably $20,000. Convert $20,000 to cedis today. That is in the region of what a nurse, a teacher, or a journalist earns a year, and many people can’t buy. Ghanaians do buy used vehicles, not because they don't like new cars. They buy used vehicles because that is what is within their margin. I agree that vehicles that have been condemned, totally wreaked which is not safe should not be put together in a very bad way and sold to us as vehicles that can cause accidents. That is not what we are saying. We are saying that those that are fit for purpose, the modalities that you put in place for them to be imported should be there.”

Car manufacturing companies such as Nissan and Volkswagen have opened assembly plants in Ghana and are expected to serve the West African car market.

The establishment of the plants is expected to create employment opportunities as well as boost Ghana's automotive industry.