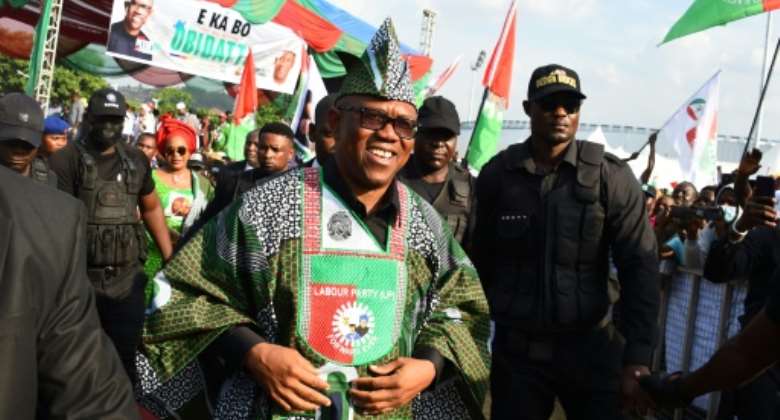 Horns blaring from the crowd, Nigerian candidate Peter Obi makes his pitch, repeating a mantra that he offers youth a chance for change in February's election.

For 35-year-old footwear seller Joseph Nwankwo it was what wants to hear.

"I never voted for any party. They believed our vote never counted. This time round we believe our vote will," said Nwankwo at the rally in southwest Ibadan city. "We are the youth. If we don't do it, who will do it for us?"

Backed by the Labour Party, Obi is emerging as a rare third challenger to the two mainstream parties who have governed Africa's most populous country since the end of military rule in 1999.

Next February's election is set to be a tight race to replace President Muhammadu Buhari, who steps down with Nigeria facing huge security challenges and an economy hobbled by fallout from the pandemic and Ukraine's war.

A former southeast Anambra state governor and one-time PDP vice presidential candidate, Obi has gained momentum with a vibrant social media following and what supporters see as a fresher voice over the other old guard rivals.

Supporters say Obi is offering a chance at change. Critics say he doesnt have the national network to win the election. By PIUS UTOMI EKPEI (AFP/File)

Obi, 61, may face many obstacles in his run to Aso Rock presidential villa, but his message is resonating especially among younger, urban Nigerians who call themselves "Obi-dients".

Whether he can win remains unclear -- some local polls have him ahead. But analysts say Obi's challenge is already complicating the political outlook for the PDP and APC.

APC is fielding Bola Tinubu, an 70-year-old former Lagos state governor known as the "Godfather of Lagos" for his political clout.

Against him, the PDP has Atiku Abubakar, 76, a wealthy businessman on his sixth bid for the presidency. He was vice president in 1999.

"All of the political and economic and social conditions have made him a palatable alternative," SBM Intelligence analyst Ikesemit Effiong said of Obi.

"It is beginning to dent the image of the traditional political parties."

Wearing glasses and often dressed in a simple black traditional suit, Obi has run a grass-roots campaign where he touts his experience as governor and his outsider status.

A wealthy trader, Obi says he is about turning Nigeria around -- increasing production rather than consumption, governing responsibly and taking on insecurity.

"The government we intend to form, will be the beginning of a new Nigeria," he told a crowd of thousands in Ibadan. "We will secure a united Nigeria."

But with little structure nationwide and no governors, rivals say the Labour party and Obi will struggle. In 2019, the Labour Party candidate won 0.02 percent of the vote. The party elected one lawmaker.

"People say the Obidients, of course they will," said Edo State governor Godwin Obaseki, who is campaigning for PDP. "But they will run out of steam."

Nigerian elections are often about geography calculations. To win the presidency, a candidate must get a majority of the votes and also 25 percent of the votes in two thirds of its 36 states.

Almost equally split between predominantly Muslim north and the mostly Christian south, Nigeria is a patchwork of ethnic groups, including the largest Yoruba, Hausa and Igbo.

In an unwritten agreement to promote informal power sharing, the presidency has rotated alternatively between candidates from the north and south.

But 2023 is complex. After two terms under Buhari, a northern Muslim, many expected a southerner. But PDP went with Abubakar, a northerner. APC chose southerner Tinubu, but an all Muslim president and vice president team.

Obi, an Igbo from the southeast, will likely do well in traditional PDP strongholds in that region, but may also dent APC's vote in Tinubu's Lagos stronghold, analysts said.

With the PDP already damaged by a deep split with Rivers State governor over its candidate, APC may benefit more from incumbency and Obi taking away PDP's votes, risk analysts Eurasia Group said.

But opponents question Obi's support in the north, where large voting blocks have delivered the presidency in the last two elections.

"Have you seen social media promoting Peter Obi in the north?" Zamfara State governor Bello Matawalle and APC leader told TVS news. "During the election they will understand they have the wrong calculation."

Voter turnout is often low in Nigeria, and some observers ask whether Obi's presence could disrupt APC and PDP support enough to force a second-round runoff for the first time ever.

"Clearly he is going to be a major factor in determining the outcome of the election," said Chidi Anselm Odinkalu, a professor at Tufts University's Fletcher School.

Lagos taxi driver Abrahim Babatunde Lawal agrees. He voted twice for Buhari and APC since 2015. Next year he is giving Obi a chance.

"He's a new dimension, someone who is different from the old politicians," Lawal said. "I won't say he is going to win, it will be very difficult, we are just hoping."